Elvis Costello & The Imposters – The Return Of The Spectacular Singing Songbook

Elvis Costello wasn’t himself 25 years ago, the musician credits on the two albums he released in 1986 listing him as Little Hands Of Concrete (King Of America) and Napoleon Dynamite (Blood & Chocolate). While the former was a self-mocking reference to his habit of breaking guitar strings, the latter was a more boastful persona who made his stage bow as the mad-eyed master of ceremonies at fairground-like live shows. 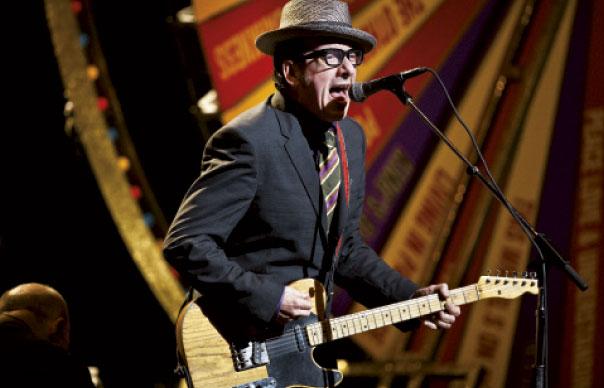 Elvis Costello wasn’t himself 25 years ago, the musician credits on the two albums he released in 1986 listing him as Little Hands Of Concrete (King Of America) and Napoleon Dynamite (Blood & Chocolate). While the former was a self-mocking reference to his habit of breaking guitar strings, the latter was a more boastful persona who made his stage bow as the mad-eyed master of ceremonies at fairground-like live shows.

Revived earlier this summer on a lengthy series of dates across America (and coming to the UK next May), the Spectacular Spinning Songbook is a novel way for Costello to take requests; a giant multi-coloured wheel, resembling a pie chart containing the names of about 40 songs, dominates the stage, random audience members are plucked from their seats and invited to give the wheel a spin. Wherever it stops determines which number EC and his Imposters will play next.

This elaborate box set comprises a CD and DVD (plus a bonus 10-inch vinyl “encore” disc) of two shows from the Wiltern Theatre in Los Angeles, the location raising questions about how random the selection of audience spinners might be. Can it really be just by chance that (i)Mad Men(i) creator Matthew Wiener and (i)Sideways/Grey’s Anatomy(i) actress Sandra Oh made the journey from stalls to stage the night the cameras were there?

Whoever spins the wheel, though, it still results in unpredictable sequences of songs, never guaranteeing that big hits or long-term live favourites get an airing, Elvis (or rather Napoleon Dynamite, an over-the-top circus barker making the alliterative declarations in keeping with Costello’s guest introductions on his Spectacle TV show) following the raucous garage of “Stella Hurt” from 2008’s Momofuku with the baroque lament “All Grown Up” from 1991’s Mighty Like A Rose. Of course, the song has to be on the wheel in the first place, and there are some intriguing inclusions.
A soulful cover of the Stones’ “Out Of Time” gives The Imposters (and the manically dextrous Steve Nieve in particular) an opportunity to pretend they’re Booker T & The MGs, “Tear Off Your Own Head” enables special guests The Bangles to croon away on the comeback hit Costello wrote for them, but the real surprise is the fatalistic ballad “Earthbound”, one of 10 tracks Elvis allegedly knocked out in a single weekend for a Wendy James album in 1993. “Of all the songs I’ve ever written, I think this is the truest,” he tells us.

As a performing unit, The Imposters take everything thrown at them in their stride, all pomp and majesty on “Man Out Of Time”, lean and hungry on a cover of Nick Lowe’s “Heart Of The City”, and Nieve’s delicate new arrangement of “God Give Me Strength” more than compensates for the lack of lush orchestration from the original Burt Bacharach collaboration. The wheel spins, and the mood swings; in the space of an hour-and-a-half Elvis gets to be the surly aggressor of his youth, the wordy troubadour of the Imperial Bedroom era, or the deep baritone crooner of more recent times.

Before 2011, Costello had been averaging an album of new songs every 12 months since brokering a lucrative deal with Universal five years ago, allowing them to exploit his first decade of releases in any way they see fit, in return for leaving him alone to make records at his own pace and as often as he wanted.

Cynics may suggest that while the Allen Toussaint collaboration The River In Reverse, the aforementioned noisy Momofuku, the bluegrass-tinged Secret, Profane & Sugarcane and last year’s National Ransom hardly had the label’s sales teams popping champagne corks, Elvis staying away from the studio this year and once again gamely pitching his back pages opens the door for further marketing of former glories. Certainly, another re-upholstered My Aim Is True or Punch The Clock may ultimately shift more units than this bespoke offering, a limited edition of 1,500 which, despite the top-notch music, lavish packaging and poster/book/diary/postcard extras, might struggle to justify its £200 price-tag.
Terry Staunton