Elbow – The Take Off And Landing Of Everything

Sombre and sparce, but not in the least bit sober: Guy Garvey and co's classy sixth... 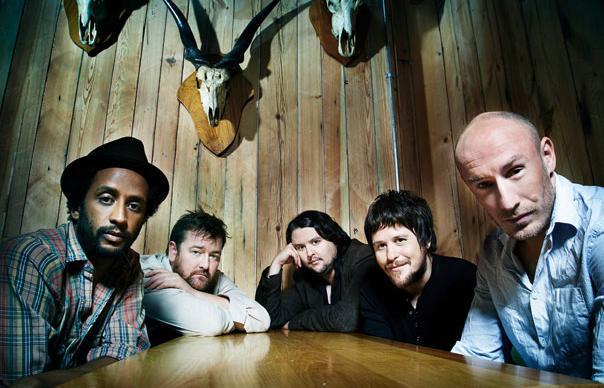 Sombre and sparce, but not in the least bit sober: Guy Garvey and co’s classy sixth…

For their sixth album, Elbow opted for a new working method, recording in small combinations rather than all together, with the remaining members chipping in their two penn’orth later. Not that you’d notice: the results are as homogenous as any earlier Elbow album – indeed, if anything, there’s a sustained congruence about the rhythms and textures that makes The Take Off And Landing Of Everything seem like an extended meditation on certain musical and lyrical themes.

“This Blue World” sets the tone through the gentle organ intro and slow patter of snare and tambourine, opening up with gently arpeggiating guitar. It’s soft and quiet, like a world asleep in snow, as Guy Garvey ruminates upon the persistence of emotional attachment. “While three chambers of my heart be true and strong with love for another,” he sings, “the fourth is yours forever”. It’s perhaps the first of several pieces prompted by Garvey’s split from his long-term partner, an apparently amicable separation that has allowed affection to linger poignantly, rather than curdle.

The separation took him to New York, where he was able to recover in relative anonymity, developing an attachment to a city other than Manchester. Built on a descending piano motif that develops through anthemic repetition, “New York Morning” celebrates the brusque enthusiasm of “the modern Rome, where folk are nice to Yoko”, and the way that “everybody owns the Great Idea, and it feels like there’s a big one round the corner”. This new transatlantic pond-hopping lifestyle is itself reflected in the title-track, a slow but propulsive Krautrock slouch of organ, drums and tambourine, and in “Fly Boy Blue/Lunette”, a tableau of airport lounge barflies and disaffected glimpses of modern life suddenly charged with a sax riff that recalls the tone and texture of early King Crimson. Three minutes and, presumably, several pints in, however, the track slips into a languid jogging bass groove of calm serenity, Garvey reflecting how “I’m reaching the age when decisions are made on your life and your liver”.

Health concerns are less uppermost in “My Sad Captains”, a celebration of the after-hours drinking culture that sustains so many fellowships, through so many generations. A Terry Riley-esque cycling keyboard figure establishes a slow, processional gait, as of a commemoration, with gentle glints of trumpet draping a cloak of nobility around the later stages. “If it’s so we only pass this way but once,” sings Garvey, “what a perfect waste of time”. But of course, the glory of being in one’s cups is but a sip away from the bitterness of the curmudgeon in the corner depicted in “Charge”, railing against the young who never acknowledge their debts: “Glory be, these fuckers are ignoring me/We never learn from history”. Set to sombre organ and sparse drums, with voice and piano declaiming in unison, it’s based, Garvey says, on an old teddy-boy he knew, whose grouchy antipathies he grew to understand more deeply the further he moved from his own glory days.

Elsewhere, the same kinds of gently pulsing grooves and sparse rhythm skeletons drive tracks like “Real Life (Angel)”, an exultant acclamation of deep love (“And on that hallelujah morning, in the arms of your love, the peace that you feel’s real life”); and “Honey Sun”, the most honest assessment of the “broken devotion” that shot him across the ocean to New York. With humming carrying the main melody over a puttering drum-machine tick, Garvey acknowledges both the impulse to flee, and the realisation that “she and I won’t find another me’n’her”.

The album concludes with “The Blanket Of Night”, another anthem of inter-zonal ambiguity, this time employing oceanic, dreamlike sheets of synthesiser to evoke the perilous journey of stateless refugees in search of a new life in less perilous environs. “Paper cup of a boat, heaving chest of the sea/Carry both of us, swallow her, swallow me,” sings Garvey, intoning a prayer of deliverance that, one can’t help felling, is heartfelt not just for them, but himself, and you, and me – a fifth chamber of his heart, beating for us all.
Andy Gill

Q&A
Guy Garvey
I understand the band adopted a different working method for this album.
It was more of an experiment than anything – the idea of everyone having a different day off, throwing up different combinations of band-members, definitely changed the way we were writing. It wasn’t that we’d reached any kind of creative impasse. I voiced a documentary on The Beatles’ White Album for the BBC, and there was this Abbey Road engineer who said that towards the end, bring any three Beatles together and the work ethic was the same as it ever was, exciting and vibrant; but when all four were in the room, there was a spirit of lethargy, something was slowing them down.

How did it work for you?
For instance, all the music for ‘Fly Boy Blues/Lunette’ was pretty much a live take, by Mark, Pete and Jup, who were the original members of Elbow – they got together at school, doing Queen covers and such. It created a bit of a challenge for me lyrically: to throw something different into the mix, I read the lines from the cover of a magazine, then I used that rhythm as a constriction to write my own images. That was loads of fun, and threw up something different that I normally wouldn’t do.

There’s an overall theme of fellowship, of the comforts of companionship, running through several songs.
Oh yeah, absolutely. I’ve always written love songs to friends, and to Manchester as well – I suppose this is the first record that I’ve written a love song to another city! I’ve always had that fondness for inanimate things: like, I still use the first touring-bag I had, when we first started touring 20 years ago. I’ve had it re-zipped and re-handled at least three times. I do develop, what is it, an anthropomorphic love?