Editors – An End Has A Start 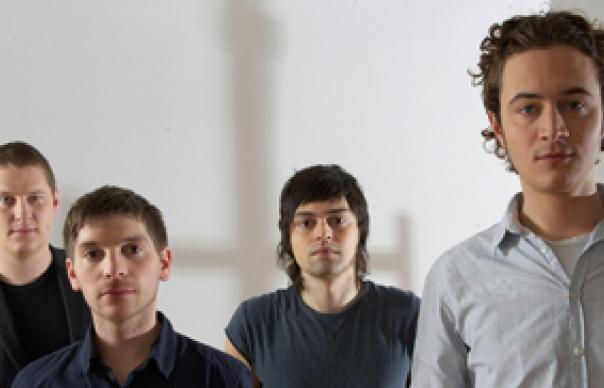 The age-old sophomore album dilemma is perhaps most difficult for bands that have made extremely distinctive-sounding debuts: When such strong stylistic earmarks have been established, how to evolve without abandoning them?

Editors defined themselves with the twitchy bass lines and lugubrious vocals of last year’s The Back Room as a band whose debt to Joy Division was no secret, but who carved out their own little corner of the gloom-rock dancefloor. They made sure that no matter how cavernous the dread they conjured up, their lyrics conveyed a certain optimistic sweetness, as if they were extending a reassuring hand in the dark.

An End Has A Start is no different in that sense, but Editors’ signature clamor is notably more expansive. Avoiding the ponderous repetition that dragged down songs like “Bullets” on the first record, they concoct a gentler, dreamier atmosphere with less apparent anxiety, and create a shadowy veil of sadness, shot through with hopeful transcendence.

On the lovely “Bones,” “Smokers At the Hospital Doors,” and “When Anger Shows,” it works particularly well. Here, the graveyard murk is lifted by ghostly, anthemic synths and Tom Smith’s pleading vocals (“These dreams I can’t make sense of /I just need you to tell me it’s OK”).

The band’s allure is predicated to a large extent upon Smith’s sonorous voice, and on An End Has A Start he sounds both tender and vaguely bored, as if he doesn’t always entirely believe his own platitudes, but he’s still going to do his best to shepherd the rest of us into a place of comfort.

At times, though – as in “Push Your Head Towards the Air” and “Well Worn Hand” – he gives in to the fear, and these piano-and-voice-based numbers, almost hymn-like in their simplicity, work particularly well. When Editors go straight for the heart, often they strike their truest, and most resonant, chord.