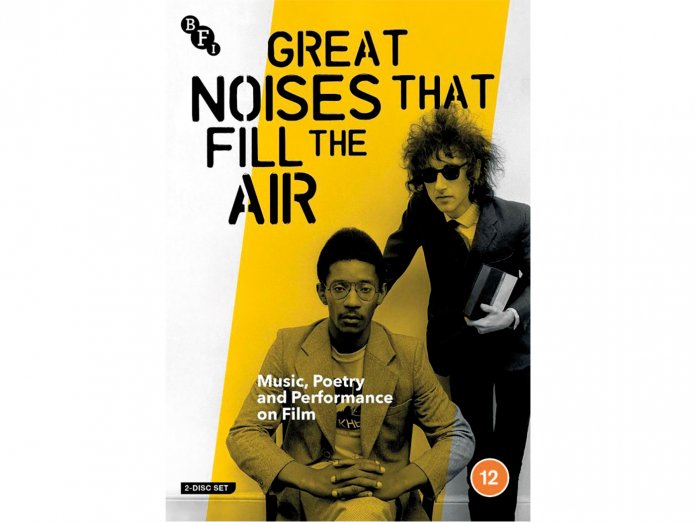 “The English excel in dancing and music for they are active and lively. They are vastly fond of great noises that fill the air, such as the firing of cannon, drums and the ringing of bells. So that it is common for a number of them when drunk to go up into some belfry and ring the bells for hours together.” So wrote the German lawyer Paul Hentzner in 1598 in his Travels In England During The Reign Of Queen Elizabeth, quoted in Simon Reynell’s short 1988 film about the scrapheap orchestra Bow Gamelan Ensemble.

This grab bag of Arts Council Of England arts documentaries from the late ’70s to the mid-’90s aspires to capture the great noises of the second Elizabethan era. From Linton Kwesi Johnson filmed in Brixton in 1979, to John Cooper Clarke in Manchester in 1982, via the radical compositions of Cornelius Cardew, the cultural fusion of Asian Dub Foundation and the brass band fantasia of Mike Westbrook, the collection looks, on the face of it, like a testament to a gloriously various lost age of state-funded arts programming, capturing the moment of punk cabaret, early Channel 4 and arts centre metal bashing.

In practice the quality is highly variable: Franco Rosso’s Dread Beat An’ Blood remains a fascinating document of LKJ in his time and place, touring with the sound systems, strolling through the market and visiting Tulse Hill schools, vividly capturing black British culture in a country on the cusp of Thatcherism, just a few months before the Brixton uprising. Meanwhile, Cooper Clarke in Nicky May’s 10 Years In An Open Neck Shirt is reliably entertaining, leading a troupe of ranting people’s poets, including a youthful Steven Wells, on a whistle-stop tour performing for earnestly pensive early-’80s students.

But some of the additional features feel cursory. Following Asian Dub Foundation to a church fête-style festival at the Open University in 1995 sounds like an idea with at least some comic potential, but the results feels like watching someone’s home video. Ruppert Gabriel’s Bristol Vibes is pitched as a “symphony of the city’s black history, a story of resistance, through music and image”, but feels like a student project and fails to provide much context. While valuable in themselves, in this context, Margaret Williams’ diligent Omnibus-style documentaries on composers Steve Reich and Elizabeth Maconchy seem to belong to a very different collection altogether.

More germane and the most charming discovery here is Charles Mapleston’s 1978 film about Mike Westbrook, following his eccentric big band as they bring their curious jazz compendium of William Blake, Bertolt Brecht and Billie Holiday to shopping centres and concert halls across Europe. Like Robert Wyatt or John Peel, Westbrook and his band feel like one of those uncanny confluences of postwar English culture, bringing together pop, prog, avant-garde, folk and jazz in way that feels uniquely, beautifully of its time and place.