Southern rockers' angry 10th gets back to basics and "blows the fucking roof off"... 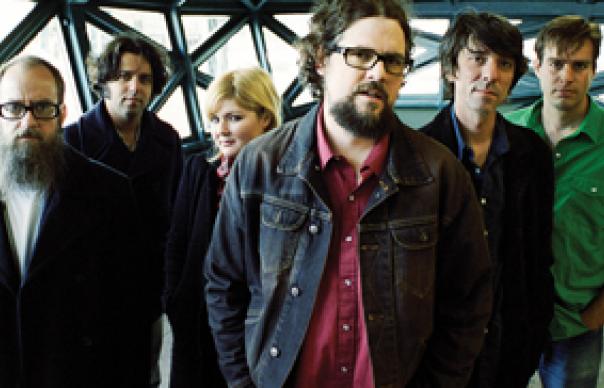 When he afterwards fetched up in New York, Bob Dylan liked to tell people he’d arrived there via a stint doing who knows what in a circus he’d run away from home to join, in search of adventure and the roustabout life.

It was no doubt typical of many boys in the long ago days of Dylan’s youth, growing up in places far from anywhere, to dream of fleeing the uneventful ho-hum of smalltown existence for a new world of gallivanting itinerancy, a life on the open road and the buck and roar of the fabled Big Top. It was one way, at least, of finding out what the country was made of.

Growing up much later, down there in Alabama, restless teenage friends Patterson Hood and Mike Cooley shared a similar roaming yen for the endless highway and the horizon beyond it. Of course, by then, the lure of the Big Top had been replaced for them, and the many like them, with the beckoning holler of rock’n’roll, otherwise known in Drive-By Trucker mythology as The Big To-Do. Hood and Cooley signed up for it as soon as the recruitment office was open and from the start were in for the long haul, whatever the cost.

Nearly 20 years after hitting, as they say, the road, they’re still on it. It’s often been a rough ride. They’ve had their share of set-backs, seen a lot of the same hard times as the people they’ve played their music to and for, with many comings and goings in the line-ups around them. The most recent departure, in 2007, after five years with the band, was the talented Jason Isbell, who brought to their already formidable repertoire knock-out numbers like “Outfit” and “Danko/Manuel”, highlights of Decoration Day (2003) and The Dirty South (2004).

Isbell’s leaving, after 2006’s A Blessing And A Curse, during an especially troubled time for the group, could have been a mortal blow. But they rallied, as they always have, driven as they are by the laudable conviction that as well as entertaining, their songs have something worth saying about more than merely this and that, like America and the turmoil therein, songs that have given voice to what Hood describes as “desperate people in troubled times”.

The Big To-Do is their 10th album, the second without the formerly totemic Isbell, and follows 2008’s Brighter Than Creation’s Dark, short-listed for the inaugural Uncut Music Award. Brighter… was their most diverse collection to date, a 19-track song-writing master class that on cuts like the bitterly sardonic “The Righteous Path”, “The Man I Shot” and “The Home Front” took a hard and angry look at what America had become under George Bush. Some long-standing DBT fans were, however, vexed by the relative absence of the roaring guitar rock of earlier albums. Patterson now describes the album as “introverted”.

The Big To-Do, it’s pleasing to report, rocks as hard and loud as anything they’ve previously done. The Truckers do here what they do better than almost anyone else – which is blow the fucking roof off, with Cooley, especially, on howlingly great form. Like Dylan’s Together Through Life, however, the album’s unfettered musical rambunctiousness only thinly disguises the harsh realities its songs variously confront. Searing opener, “Daddy Learned To Fly”, for instance, with Hood and Cooley sounding as unstoppable as a Mack truck or Neil Young in headlong flight, is a song about overwhelming grief, perhaps inspired by the deaths last year of Southern legends Jerry Wexler and Jim Dickinson, both friends and supporters of the band.

Elsewhere, there’s much seething anger at America’s economic meltdown and the havoc consequently wrought in hard-pressed communities, where unemployment was already, in a word, rife. Cooley’s rockabilly tear-up, “Get Downtown”, addresses this with typical bleak drollery, as does his fabulously no-holds-barred rocker “Birthday Boy”. Hood’s “This Fucking Job”, though, is a furious maelstrom, powered by the riff from The Who‘s “I Can’t Explain”, that lays bare a terrible desperation. Redundancy of another kind concerns Patterson’s yearning “After The Scene Dies”, which imagines the closing down of the rock’n’roll club circuit that has for so long supported the Truckers and road warriors like them.

On other fronts, there are vivid, blackly comic vignettes by Hood, like “The Fourth Night Of My Drinking”, “Drag The Lake Charlie” and “The Wig He Made Her Wear” that recall the toxic humour of Warren Zevon, plus one of Patterson’s most tender ballads, “Sante Fe”. Bassist Shonna Tucker, whose “I’m Sorry Houston” was a highlight of Brighter Than Creation’s Dark, contributes two more fine songs here – the melodramatic pounder, “You Got Another” and the irresistible “It’s Gonna Be (I Told You So)”.

Where does the circus theme come into all this? Principally, via Wes Freed’s album artwork and a song by Patterson called “The Flying Wallendas”, about the legendary high-wire act of daredevil Big Top legend, who refused to perform with a safety net, even when it started costing them their lives in fatal accidents. Karl Wallenda, the troupe’s founder, many of his family already dead, continued to perform, refusing to retire, until he too fell to his death. He was 73, and in his obduracy, Hood clearly sees something of his extraordinary band’s own rugged determination to never give a fucking inch.

Q&A PATTERSON HOOD
We’ve just met in a bar. You’re telling me about The Big To-Do. How would you describe it?
It’s a Big Rock record. It’s dark and spooky at times, but also big, loud and hopefully a lot of fun. It’s our most melodic album and probably comes closer to capturing some of the energy of our live show than anything we’ve recorded in a long time.

Great to hear the guitars turned up to 11 again. What inspired that?
We always want to move forward, but every now and then it’s good to circle back and see where it all stands. It’s a new decade and after all we’ve been through, this one could be construed as the rock’n’roll equivalent to a State of the Union address.

You have enough material for a second album this year. Will that be The Big To-Do Part 2 or something different?
About as radically different as this band can get. It’s called Go-Go Boots and if The Big To-Do moves in a fairly straight line (for us) then GGB is the drunk driver weaving all over the place. I’ve also referred to it as our album of R’n’B murder ballads, but that’s probably a little wishful thinking. If it were a movie it would be some kind of dark twisted noir, certainly more David Lynch than David Lean.
INTERVIEW: ALLAN JONES