That first day at high school is still a bummer, starring Owen Wilson 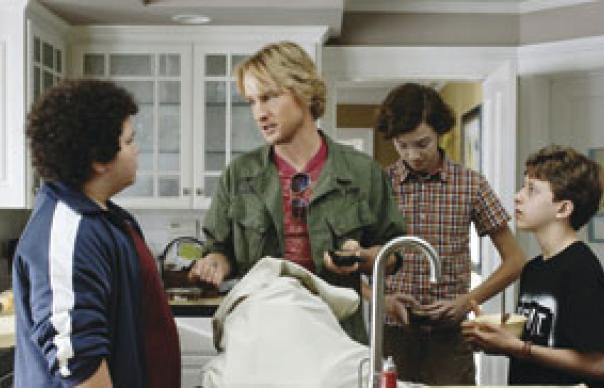 
Written by Beavis And Butthead graduate Kristofor Brown and Superbad writer Seth Rogen from an idea by John Hughes, Drillbit Taylor is an oddly asinine teen comedy, almost – but not quite – saved by the intervention of Owen Wilson as a homeless bum who offers protection to three boys after convincing them that he’s a black ops specialist who just happens to live in a bush. There’s a fat one (Troy Gentile), a thin one (Nate Hartley) and a mini-geek in a Cats t-shirt (David Dorfman), whose response to the taunting of the school bully (Alex Frost) is, obviously, a small ad in Soldier of Fortune.

This revenge of the nerds is complicated slightly by their budget bodyguard’s fear of violence (“I was discharged,” he explains, “unauthorised heroism,”) and a subplot in which, by wearing a cardigan and changing his name to Dr Illbit, he becomes romantically involved with a pretty lady teacher. Meanwhile, Drillbit’s bum chums are encouraging him to exploit the goodwill of his young charges by robbing their homes and fleeing to a new life in Canada.

Wilson, as ever, is a charmingly vague presence, and allows his oddly-shaped nose to take a lot of punches. The kids are never less than alright, but the brand-stretching of the Judd Apatow empire is surely approaching snapping-point.
Good trailer, mind.