Dr Feelgood – All Through The City 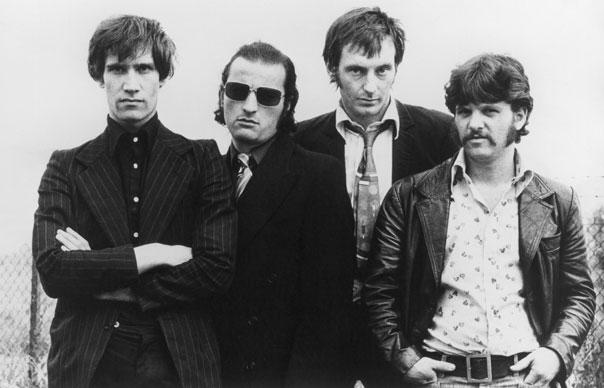 It’s Sunday, November 17, 1974 at that bastion of hippie fundamentalism, the Camden Roundhouse, where mad dog Canvey Island rhythm and blues monsters Dr Feelgood are supporting Nektar, the Anglo-German space warriors, who the rump of the hairy crowd is here to see.

The Feelgoods have been tearing up the London pub circuit for the last year, their incendiary live shows already the stuff of legend, everyone who sees them having a hard time remembering when a British rock’n’roll band sounded quite so wild, most people agreeing you’d have to go back to the early days of The Who and The Rolling Stones. For many in tonight’s crowd, their music is alien and a not a little frightening, the sheer feral caw of it utterly at odds with the prevailing popular trends of the times. So people gawp at them, bewildered and unsettled by what they’re listening to.

Guitarist Wilko Johnson will have caught the eye of many, a gangly man in a slightly grubby black suit that makes him look like an undertaker’s assistant. His face is deathly pale beneath an institutional haircut with the unsettling stare of Anthony Perkins in Psycho, someone who lives with stuffed birds, a mother in an upstairs window, briefly glimpsed against dour light. What Wilko’s playing and the way he’s playing it is equally somewhat off-kilter – carnal blues riffs, dispatched with slashing ferocity, frenetic choppy chords and no solos to speak of, the songs too brutally short to accommodate the kind of pointless virtuosity that is otherwise the order of the day. The rhythm section, meanwhile, two burly men who look like club bouncers, are bassist John B Sparks and be-suited drummer John Martin, known to everyone as The Big Figure. They drive everything forward with a relentless momentum, are only brought to leash by harsh command.

The band’s singer is as lean as a car aerial, crop-haired, something predatory about him that’s genuinely threatening. He appears consumed by an unspecified anger, some seething resentment. The music the band’s playing is possibly the only outlet for his frustrated energies that won’t involve a jail sentence. He seems coiled, as venomous as something with scales, about to strike. His name’s Lee Brilleaux, and at least until Johnny Rotten lurches into view, malice in bondage trousers, he’s English rock’s most intimidating front man.

And here’s when it all goes off. About half-way through their set, someone in a tatty cape clambers onstage, shouts incomprehensibly into a spare microphone and blows a mouth organ, tunelessly. If something like this had happened at, let’s say, Woodstock, Country Joe or John Sebastian would probably have written a song about the intrepid caped intruder, or given him a communal brotherly hug. Lee’s reaction is altogether less benign. He first of all glares malevolently at him and then head-butts the fucker off stage. Lee then stands there, fists clenched, ready to take on all-comers if they fancy their chances, which nobody does.

The incident isn’t widely remarked upon at the time, but it’s in some way like Lee’s fired the first shots in the punk wars to come, sent out a message that it’s time on a number of fronts for a major change. The Feelgoods as John the Baptists to The Sex Pistols’ savage messiahs, an advance guard for the havoc that follows, the full-on fury of punk, may yet seem to some unlikely. But evidence of their crucial influence on the insurrection to follow is everywhere evident on the four albums by the original line-up included in this long-overdue box set alongside a CD of unreleased studio tracks, demos and live cuts, plus a fabulous DVD, culled from UK television appearances, live footage from the Southend Kursaal and Finland’s Kuusrock festival.

As much as their music, it was their attitude that connected them punk. Their January 1975 debut album, Down By The Jetty, was famously released in mono and as such taken as a further example of their snarling contempt for the bloated thing rock music has by then become, an act of wilful defiance at a time when making a record for most groups is such an overwrought process it’s a wonder they ever release anything. Produced by Vic Maile, who’d engineered The Who’s Live At Leeds, the album was as stripped-down and uncompromising as their shows, the band recorded live in the studio with no overdubs (the version of the LP presented here is the excellent re-master of the original mix released as part of the 2006 deluxe reissue alongside a stereo mix of the album).

When they first came to London, the Feelgoods’ set lists were full of cover versions of blues and rock’n’roll standards, some of which were recorded for Down By The Jetty, but mostly discarded. Nine of the album’s 13 tracks, in fact, were Wilko originals. His songs shared much with the classics that had inspired the band. But on key tracks here like “All Through The City” – and also “Going Back Home” and “Back In the Night” from follow-up album Malpractice (October 1975) – familiar blues preoccupations with, variously, sex, reckless women who bring you nothing but hurt, the pursuit of often illicit thrills and the like were squarely set against the drab backdrop of 70s Britain, a grim landscape of tower blocks, oil refineries, factories, bleak estates, growing unemployment, limited opportunity and as such were an acknowledged influence on songs later written by Joe Strummer and Paul Weller, especially.

Malpractice, again produced by Maile, took the Feelgoods into the charts for the first time. But their biggest success came with the September 1976 release of Stupidity, recorded at audibly blistering concerts in Sheffield and Southend. One of the greatest of all live rock albums, newly re-mastered, it went straight to number one. Briefly, they were the biggest band in Britain.

Things were about to take an unhappy turn, however. During the fractious sessions for their fourth album, Sneakin’ Suspicion, Wilko walked out on the band after falling out with Brilleaux. The album, rather too glossily produced by American studio veteran Bert De Coteaux, was nevertheless another hit and the title track gave them their first Top 20 single. Wilko’s departure wasn’t quite a fatal blow and the band with new guitarist John ‘Gypie’ Mayo had their biggest hit in 1979 with the Nick Lowe-produced “Milk And Alcohol”. A line-up goes out even today under the Feelgoods’ name, although Sparko and The Big Figure left in1982 and Lee died in 1994. But as this terrific collection so vividly reminds us, it’s the original quartet who wrote their name in glory, unforgettably.
Allan Jones