Dirty Three – Towards The Low Sun 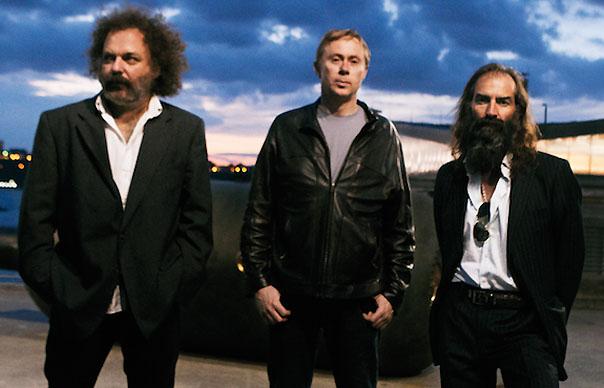 Much like his frequent collaborator Nick Cave, Warren Ellis is a man of extremes. Whether it’s traditional balladry of the most romantic kind (as a Bad Seed), or frazzled abstraction of the most modern and intense variety (Ellis didn’t only provide Grinderman’s noisy mid-section, but was also the laptop-hip muso who looped their ad hoc output into shape), in whichever arena Cave wants to compete, Ellis is there with the complementary materials.

Predating even his collaborations with Cave (now extending to yet a third format, duo recordings for film soundtracks), however, there was Dirty Three, Ellis’s own band, a trio that exemplified his bipolar musicality. Live, the band – that’s Ellis on violin and its variables; Mick Turner on guitar; superb drummer Jim White – would combine a fierce physical energy, finding Ellis often perched one leg like a feral Ian Anderson. Dirty Three albums have often delivered great beauty, but occasionally obliged one to sign up for what one might describe as melancholic sawing of an only intermittently engaging kind.

Towards The Low Sun, although a revelatory, rejuvenating work, dispenses with neither the Dr Jekyll in the band’s music, nor his Mr Hyde. Having tried on two previous occasions (and failed) to record their tenth album, the members of Dirty Three had begun to wonder if there was any life left in their aggregation. The session that eventually resulted in this album, however, found them getting off on the right foot, and then staying grimly on track, through an album that seems paced like a rough voyage. There are moments of terrific turbulence, solemn quietness and some sadness, but the collection eventually lights on safe harbour.

Hearing the first track recorded for the album, opener “Furnace Skies”, one can understand how the Three felt that they were onto something. Beginning with a dirty and growling riff, “Furnace Skies” is a pretty terrifying but incredibly thrilling thing, a storm of uncertain eye and savage temperament that whips the band and the listener about. Having set themselves in this rough weather, the band rise immediately to the challenge: Jim White’s drums expanding the band’s remit into something pretty close to free jazz, the abandonment they achieve in their own unconventional rock ‘n’ roll almost nudging them out of the genre altogether. Still, the Dirty Three’s musicality is such that they find beauty in such a harsh environment, a Farfisa organ discovering some peace amid the chaos.

The following track, “Sometimes I Forget You’ve Gone” was the second composed and amply illustrates what varied types of musical activity they are capable of, being an exquisitely melodic piano piece. If there’s a mood for the remainder of the album, it’s fair to say that this – understatedly sad; detailed, but free; generally beautiful – is the model for it. There are breaks from this pattern (particularly the Crazy Horse with violin squall rock of “That Was Was”) but the quality of this album is its sparing use of Dirty Three’s most immediately recognisable signature – Ellis’s expansive violin playing. What’s on offer instead is a sequence of tunes like “Moon On The Land”, which are concise, well-developed and innovatively arranged. “Rising Below” and “The Pier” both foreground Mick Turner’s guitar clanks, Ellis providing a more rhythmic and almost looplike accompaniment, “Ashen Snow” meanwhile, sounds like a bridge between post-classical piano and a hip-hop break from an old soul record.

Towards The Low Sun essentially is an album where the Dirty Three stop taking themselves for granted. As much of a novelty as it may once have been to have presented a band in which much of the drama was provided, for want of a better expression, by rock ‘n’ roll violin, this album demonstrates how even that unorthodox unit might be reinvented. Now, as their first album proclaimed them to be: that’s to say sad, but also genuinely dangerous.
John Robinson

Q&A
WARREN ELLIS
Is this new album the sound of Dirty Three coming out fighting?
Absolutely. I think we realised it had been a while since we’d made a record – and we wanted this one to come out roaring. It felt like it had gone somewhere else, and it was a good time to start up again.

Do you see each other when you’re not making records?
We live on three different continents, which has been the case for the last 15 years – we’ve worked out a way to deal with that. That’s like any band I’m in. We’re in touch, particularly with Jim. We have a continued dialogue, even when we’re not recording.

There’s been quite a long gap since the last album.
We were trying to record. We’d get together, but things just wouldn’t seem to evolve. We tried twice – once in Paris and once in Australia and it didn’t seem like we’d got anything, and I was a bit spooked by that – our only way of knowing if we keep going is if we keep moving forward, because time is precious. Playing live gave us a way to get back in to this. We knew we didn’t want much structure, didn’t want to harness anything. We wanted it to speak for itself.
INTERVIEW: JOHN ROBINSON