Bruce Willis is back, blowing up everything in sight, in this old school summer blockbuster 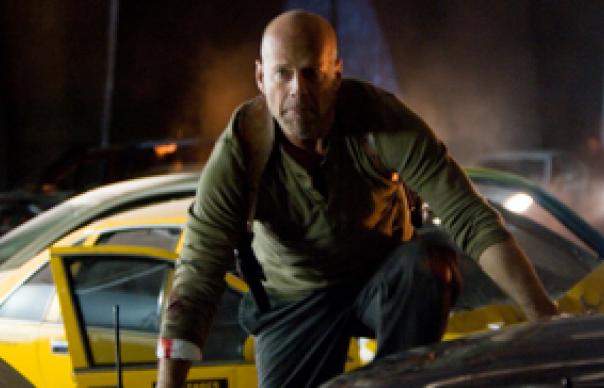 Director Len Wiseman, who made the two Underworld movies, uses a contemporary, teccy hook – cyber terrorism – to highlight McLane’s resolutely retro talents. All he’s got is a vest and a gun, and he isn’t going to take shit off anyone. Chap! Of course, that doesn’t mean he won’t, say, drive a car into a helicopter in the name of bringing down bad guy Gabriel, who’s in the process of shutting down the entire United States computer systems.

As with the previous Die Hards, McLane is the right guy in the wrong place, here given the simple assignment of bringing in a computer hacker, Matt Farrell (Long), for questioning. Farrell is one of a number of hackers writing small pieces of code for Gabriel that’ll engineer his “fire sale” (as in, “everything must go”); Gabriel is picking them off one by one to cover his tracks, and he just happens to attempt to whack Farrell when McLane arrives on the scene. Matters inevitably become personal when Gabriel kidnaps McLane’s daughter, Lucy.

Wiseman sets up some fantastic set-pieces – the conventional stunts trounced by a showdown between an armoured 18-wheeler and a fighter jet on the interstate. And, as Bruce dangles from an SUV that he’s rather inconveniently driven down a lift shaft in another scene, you do suspect Wiseman is laughing at the laws of physics. In fact, you wonder what medical opinion would say about McLane’s superhuman ability to sustain almost endless physical injuries in the line of duty.

But it’s like hanging out with an old friend, as the pauncher and balder McLane cracks that familiar smile, delivers a nifty putdown or simply blows shit up in the tried and tested method we know and love.
Perhaps Die Hard 5 might be pushing it, but this, at least, is great fun.