On their dark, downbeat third album, the former goodtime rockers have got it bad... 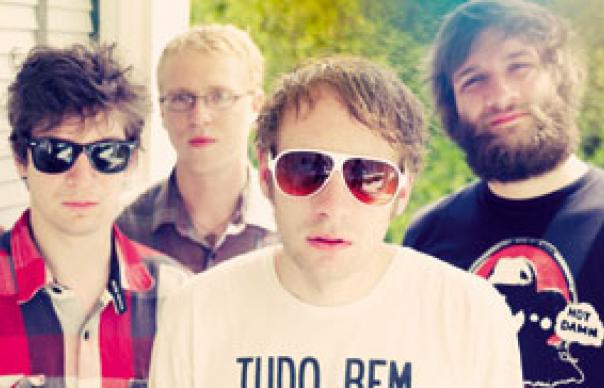 When they played Club Uncut at London’s Borderline last December, a night people I know were talking about well into the New Year, Deer Tick noisily essayed the kind of rock’n’roll you don’t hear these days as often as you’d maybe like, the sort that lights up everything around it like a burning house, and feel inclined therefore to cheer until you’re hoarse when you do.

You got a hint of where things might eventually end up when John Joseph McCauley III, who fronts the band and writes their songs, which he typically sings with rasping intensity, kicked things off by toasting the crowd with a bottle of Jack Daniel’s, from which he then took an admirably hearty slug. Deer Tick then played as their opening number a version of Bo Diddley’s “Who Do You Love?” that you could fairly describe as scalding. “Just 22 and I don’t mind dying” McCauley sang with noticeably fearless relish, and with his tattooed jailbird look you could almost believe him.

An hour and the change in your pocket later, Deer Tick closed with a cover of The Replacements’ “Can’t Hardly Wait”. And maybe because that song was still ringing in my ears when someone on the way out asked me what I thought their next record might sound like, I remember telling them it wouldn’t be entirely a surprise if it sounded something like The Replacements’ 1987 album, Pleased To Meet Me. What I guess from this particular distance I meant by that was an album that barely took its foot off the brake, roared through red lights, had its cautionary side but was largely a defiant holler. You may even have agreed, in which case we were both wrong.

The Black Dirt Sessions is roughly the equivalent of The Replacements going straight from the rowdy delinquency of 1981’s Sorry Ma, Forgot To Take Out The Trash to the ashen resignation of 1990’s All Shook Down, with nothing in between. There were overcast moments on Deer Tick’s last album, Born On Flag Day, notably the bereft closer “Hell On Earth”. But nothing really was as cloudy and sunless as this album’s most eclipsed episodes and dark encroachments. The first clue to the album’s abiding mood of course is its title, which, let’s face it, doesn’t promise much in the way of shrieky hen party floor-stompers, or otherwise raucous knees-ups.

We don’t know what’s happened in McCauley’s life since Born On Flag Day to make him so concerned here with bereavement, mortality and unravelling loss. But you’d have to guess that it was more than, say, his dog dying, although you should never underestimate what effect the passing of a favourite pooch might have on a man. Album opener “Choir Of Angels” further reveals the record’s sombre inclinations. It sounds like something you might hear being played by a band well past closing time in a border town cantina, the lights low, one or two people still on the dance floor, others huddled over drinks, the kind of place people on the run from things they’d rather forget end up. “They took my body, they robbed me blind” McCauley sings, his voiced weathered and frayed. “No turnin’ back now, no use in cryin’” he goes on, sounding much older than the 24 he is, over vaguely melodramatic organ, twanging guitars, the arrangement doo-wop inflected, a little Tex-Mex in there, too. The song’s fatalism and the music it’s set to make you think of the charred topography of Dylan’s Together Through Life.

“Twenty Miles”, which quickly follows, is a song of yearning and regret, but compared to most of what’s to come is not entirely bereft. It has the auburn glow of early REM. Guitars and piano pick out a pretty melody over bowed double bass and McCauley’s swirling wordless vocal refrains bring to mind something from Fables Of The Reconstruction or Life’s Rich Pageant, “Good Advices” or “What If We Give It Away?” perhaps. Things after this, however, get dark in a hurry, the shutters first coming down with “Goodbye, Dear Friend”, a worryingly raw eulogy with McCauley alone at the piano, pounding out magnificently gloomy chords.

The track’s simmering anger seeps through then into the hugely recriminatory “Piece By Piece, And Frame By Frame”, a song of jealousy and suspicion, betrayal and retribution, that could have found a home on Costello’s Blood And Chocolate. After this, the brief, lovely acoustic ballad “The Sad Sun” is a poignant relief. The respite it offers, however, is temporary. “Mange”, which is what’s playing now, is a festering thing, introduced by speculative percussion, guitars revving up for what sounds like may turn into an assault on “Sweet Home Alabama”. There’s a lot of self-loathing going on about now, and the music’s become an ominous rumble, blowing in from a troubled horizon. Suddenly, out of apparently nowhere, there’s the kind of urgent piano that could be Nicky Hopkins on something dank by the Stones and guitarist Ian O’Neil, who recently joined Deer Tick as a replacement for the departed Andrew Tobiassen, is weighing in with a cleaving solo and the whole thing has turned into “Sympathy For The Devil”. For a couple of minutes there’s so much turbulence you expect the seat-belt signs to start flashing.

Country harmonies and grimy Crazy Horse guitars usher in “When She Comes Home”, a song of estrangement and separation which has the woozy gait of Neil Young’s “Roll Another Number (For The Road)”. A similar disconsolation is evident on “Hand In Hand” and taken further on “I Will Not Be Myself” – “Gouge out my eyes, because I know love is blind” – a nightmarish excursion into a noir landscape of obsession, deceit and violence that’s also occupied by the scary “Blood Moon”, which has the forbidding reek of Denis Johnson’s astonishing novel, Already Dead.

The album plays out with the agnostic despair of “Christ Jesus”, which is pitched somewhere between the confessional brutalities of John Lennon/Plastic Ono Band and something by John Cale that degenerates into a lot of unnerving screaming. McCauley’s voice is at its most serrated here, an untrammelled vicious howl that will be uncomfortable to some. The song itself is unilaterally cheerless, full of seething animosities – “I’ll kick in your lungs and I’ll bite off your tongue, Christ Jesus” – and a grim acknowledgement that there’s only one way things end in the world The Black Dirt Sessions describes, which is badly for everyone.
Allan Jones