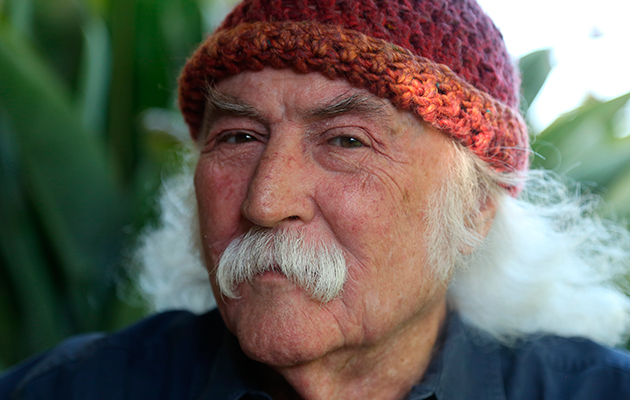 David Crosby and Joni Mitchell go back a long way. It was Crosby, of course, who first enticed Mitchell to Los Angeles in 1967, producing her debut album and offering an entrée to the prime movers in the embryonic Laurel Canyon scene. Briefly lovers, they became life-long friends. Crosby has rarely missed an opportunity to rave over Mitchell’s singular gifts, particularly since her brain aneurysm in 2015.

Their connection is gently re-enforced on Sky Trails, Crosby’s third solo album in four years – and not simply because one of its ten tracks is a lovely cover of Mitchell’s “Amelia”. Transposed to piano, the opening lines echo the title of the album (“I spotted six jet planes / Leaving six white vapour trails across the bleak terrain”) – an indication, perhaps, that the association is intended to run deeper than a single, tender tribute.

“Amelia” originally appeared on Hejira, Mitchell’s first foray into jazz fusion. Sky Trails picks up some of the mood of that album, as well as its follow-up, Don Juan’s Reckless Daughter, and Crosby’s 2014 album, Croz. Where last year’s Lighthouse was pared down and reflective, built around voice and guitar, Sky Trails is more fully-fleshed out, characterized by burbling fretless bass; lush jazz-inflected grooves; fluting saxophones and elegantly fragmented melodies.

There are further nods to mid-70s Mitchell on “Curved Air”, a busy jazz-flamenco with Spanish guitar, Moorish handclaps and galloping fretless bass. On “Here It’s Almost Sunset”, bassist Mai Agan and saxophonist Steve Tavaglione summon up the spirit of Jaco Pastorius and Wayne Shorter on something like Joni’s “Jericho”; the choppy guitar figure and martial rhythm, meanwhile, isn’t a million miles from Bowie’s “Lazarus”.

The album is a thoroughly collaborative affair. The majority of the tracks were co-written with Crosby’s son and producer, James Raymond, who also produced Croz; Michael MacDonald earns a co-writing credit on “Before Tomorrow Falls On Love”, a classy, late night piano ballad. Yet the mood throughout is quintessential Crosby. You would expect him to have something pointed to say about the current state of America, and he saves it all up for the seven-minute “Capitol”, a tale of unilateral political disgust in which he contrasts the majesty of the government buildings and historic symbols of power with the “sharks” running the show, who “sneer at the people who voted” and will do “anything to stay part of the machine”.

It’s not subtle – no Joni-style obliqueness here – but Crosby builds up a fair head of steam amid a bluesy churn of rhythm and flickers of pedal steel, punctuated by a Herbie Hancock-like synth solo and squealing sax. Sleek jazz-fusion never felt so insurrectionary, although at other times it’s less confrontational. “She’s Got To Be Somewhere” rides a plush yacht rock groove, all syncopated horns and freeze-dried keyboards, to rather anodyne effect. “Sell Me A Diamond” begins promisingly, with a rippling piano figure and sparse rhythm, before building to an overwrought climax.

Though it’s an album of group performances, there are moments of exquisite, near solitary tenderness. “Somebody Home”, the only song solely written by Crosby, is a spare, atmospheric rumination, peppered with organ and horns, and sung with an intimacy and intensity remarkable for his 75 years. The song’s openness to a significant emotional connection is mirrored in “Curved Air” – “I might get found” – and again on “Sky Trails”, written and sung with Becca Stevens, which mixes a similar sense of cosmic disorientation (“Please tell me where I am”) with a deep yearning to belong. It’s a shadowy tour de force, the pair’s intertwined voices scattered among fragile shards of acoustic guitar and lonely trails of soprano saxophone.

Crosby finally finds his safe place on the closing track. “Home Free” is musically pensive, and though the lyrics flirt with the abstract and ethereal – candles, altars, Noah and the Ark, the wagon trains of America’s early pioneers – at heart it’s a thanksgiving for life’s simple graces, as many of Crosby’s songs are these days. All he craves is a bath, a coffee brewed on a “battered old stove”, and a place to be. The old rover has become “a tree always knowing where its leaves will fall”.

He has much to be thankful for. Yes, there’s the odd moment here that comes perilously close to Burning Man blather, and at times the production is overly slick, but Sky Trails is a strong, sinuous piece of work. Riding a creative wave, Crosby is not merely honing his craft, but expanding its parameters. Joni would no doubt approve.

Q&A
DAVID CROSBY
There are seven co-writes on the album. How does that process work?
James and I both write words and both write music. At times, it’s hard to tell who wrote which, in one line you’ll get words from both of us. Same with Michael MacDonald. He’s a joy to write with, a real craftsman who works hard and doesn’t take anything for granted. The great thing is, the other person always thinks of something you didn’t. You have more colours on the palette, and it makes for a different painting.

Why did you choose to cover “Amelia”?
I’ve always wanted to sing that song. I love that song! What a stunning piece of work she did, the two levels of it: talking about Amelia Earhart and talking about her own love life at the same time, so eloquently, with such a beautiful set of words. Her version is quite ornate. I tried to sing it very simply.

I can hear Joni’s influence elsewhere on the record…
We influenced each other very strongly for a while. She and I were both very taken with jazz. Some of it was my influence, but by no means all. She went whole hog in that direction the longer she went in, and became more intricate and complex. It’s all to the good.
INTERVIEW: GRAEME THOMSON