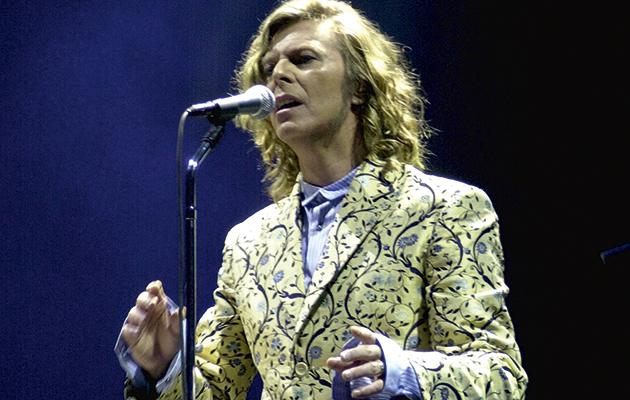 The afterlife of David Bowie is proving surprisingly rich. The ongoing Five Years boxsets, live albums, reissues, repressings, an EP of unreleased material. And now his 2000 Glastonbury headline performance – unseen and unreleased for 18 years. BBC producer Mark Cooper filmed the show in its entirely but was strictly limited by Bowie to a one-off live broadcast of just seven songs. Cooper calls it “surely his greatest concert since he buried Ziggy Stardust at Hammersmith in July 1973.”

Now, following years of negotiation, the full Glastonbury set finally makes its debut as a live DVD and album. Bowie was always oddly allergic to official concert films, even in his world-conquering prime. DA Pennebaker’s 1973 Ziggy feature only earned a full release after a decade of wrangling, while a full-length film of his 1978 Isolar II tour, directed by David Hemmings, has been sitting in limbo for decades. “I simply didn’t like the way it had been shot,” Bowie told Uncut in 2001. “Now, of course, it looks pretty good and I suspect it would make it out some time in the future.” That was 17 years ago. Keep watching this space.

I witnessed this millennial Glastonbury show first hand. At the time, after numerous ’90s tours, seeing Bowie live did not feel like such a momentous event. But history has given this performance extra mythic weight, especially in the light of his abrupt retirement from touring just four years later. Revisiting it now in crisp BBC-filmed close-up, this bespoke two-hour banquet of wall-to-wall hits surpasses my shaky memory of it. There is scarcely a dud performance or a weak choice among these 21 tracks. It’s a godawful huge affair.

Sporting a technicolor dreamcoat designed by Alexander McQueen, his long blond hair crimped and swept into an asymmetrical swoosh, Bowie looks fabulous, preposterous and absurdly youthful for his 53 years. This striking androgynous look pays knowing homage to his 1971 Hunky Dory album, which coincided with his only ever previous appearance at the embryonic Glastonbury Fayre 29 years before. “I left my Bipperty-Bopperty hat there, in the farmhouse,” Bowie writes in the accompanying archive diary pieces included in this DVD package. “I wonder if it’s still on the chair? With my bottle of cannabis tincture?”

The career-spanning set-list draws heavily on this proto-glam period, with a generous side order of Station To Station. The band includes familiar lieutenants like avant-jazz pianist Mike Garson, latterday bass queen Gail Ann Dorsey and guitarist Earl Slick, returning to the Bowie family after more than 20 years away.

Slick channels his guitar-shredding younger self on the tensile, tightly wound funk-rocker “Stay” and the monumental prog-soul juggernaut of “Station To Station” itself, whose incantatory vocals and kabbalah-laced lyrics now sound like early blueprints for Blackstar. Another rich cut is “Golden Years”, with Bowie fully engaged as a vocal stylist, constantly tweaking the timbre and grain of his voice, teasing out new harmonies from ancient material.

Bowie’s ingratiating cockney-geezer shtick feels forced at first: “Glastonbury you’ve got a very, very lucky face!” But once the band start cooking with rollicking versions of “Changes”, “Life On Mars?”, “Starman” and more, he stops looking like an actor playing a rock star and relaxes into being the real thing. Four tracks in, he trades his eye-catching coat for a slightly less flamboyant charcoal-grey frock number. “I’m really hot and sweaty,” he grins. “I wore a stupid jacket, I’m too vain to take it off.”

A soaring take on “Absolute Beginners” and a swashbuckling “All The Young Dudes” whip Bowie up into a full-throated frenzy of preening. “The Man Who Sold The World” gets the same lusty treatment, with some gorgeous intertwined vocals in its fade-out section. Meanwhile, the band throw in a couple of false starts. Always a tricky prospect live, with a tendency to plod, “Heroes” opens as a gentle bluesy stroll before powering up into the shuddering edge-of-mania anthem it needs to be. Likewise, “Let’s Dance” begins as a breezy flamenco-pop ballad before that knife-sharp Nile Rodgers arrangement kicks in around the first chorus. The only real weakling here is a decaffeinated “Fame”, which sorely lacks the sour coke-hangover bite of its Lennon-assisted original.

Whatever Bowie’s objections to sharing this performance 18 years ago, they seem ill-conceived today. When it ends, he is on his knees, miming air guitar and bowing effusively to the Glastonbury crowd. He’s in the best-selling show. The greatest since he killed off Ziggy? Arguably, but certainly an autumnal peak.