The concert film as political statement 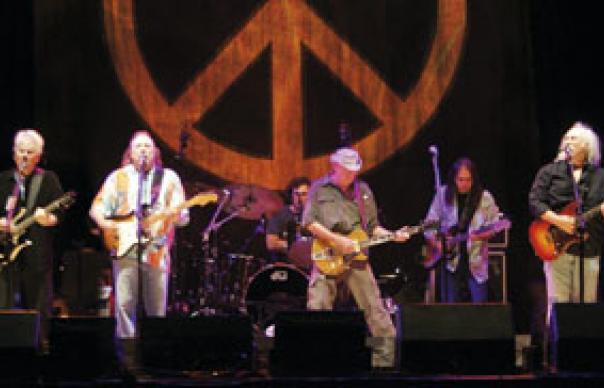 In the ’60s and ’70s, Crosby, Stills, Nash and Young sang and played in protest against a misbegotten war in a South-East Asian jungle.

Nearly four decades later, they did the same about a misbegotten war in a Middle-Eastern desert. Déjà Vu, directed by Neil Young under his nom-de-cinéma Bernard Shakey, sets out its stall as a chronicle of CSNY’s 2006 Freedom Of Speech tour, but builds into something much more, and much more important.

CSNY, now a mainstream heritage rock act and an enduring touchstone of the counter-culture, find themselves stranded between the dug-in rival trenches of American conservatism and liberalism. Narrated by ABC correspondent Mike Cerre, whose previous embeds include riding with Marines in Operation Iraqi Freedom, the unflinching Déjà Vu is a fascinating portrait of a fractious country.

Young’s central anti-Iraq war point is as direct as his songs from Living With War. But he balances matters with room for dissent – including from Stephen Stills, who dismisses much of the tour as “a political cartoon” – and humour (bad reviews are sportingly recited along with the good). The most memorable scene is of CSNY unleashing “Let’s Impeach The President” upon Atlanta’s divided crowd, complete with boos and walk-outs.

As the film proceeds, focus shifts away from CSNY and towards the veterans with whom Young has become involved, and who he treats with a humility that more bellicose anti-war campaigners could learn much from.

It’s hard to imagine a more convincingly damning indictment of America’s Mesopotamian misadventure – Afghanistan, quite properly, is not mentioned – than the one propounded by these articulate, thoughtful people, who’ve earned their understanding the hard way.

Despite the title, and despite jump-cuts from Iraq now to Vietnam then, from the greying CSNY to their slimmer, younger selves, Déjà Vu is, like Young’s career as a whole, an act of optimism. It’s a distinguishing feature of the American experiment that its sternest critics are those upset by the country’s failures to embody its own founding ideals. The Stars And Stripes hoisted on CSNY’s backdrop is not an ironic gesture. Nor is the song that closes both Living With War and Déjà Vu: a soaring, choral “America The Beautiful”.