Cian Nugent & The Cosmos – Born With The Caul

Introducing, from Dublin, a new star of psychedelic folk-rock… 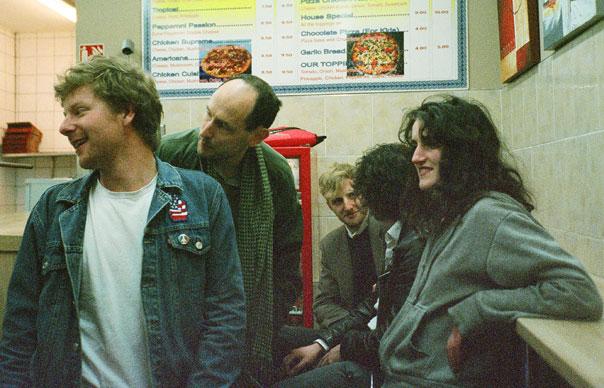 Introducing, from Dublin, a new star of psychedelic folk-rock…

History does not tend to memorialise Television as a folk band. Nevertheless, when Nick Kent reviewed Marquee Moon for the NME in 1977, it wasn’t just the wild mercury sound of downtown New York that entranced him. “The song’s structure,” he wrote of “Marquee Moon” itself, “is practically unlike anything I’ve ever heard before… The band build on some weird Eastern modal scales not unlike those used in the extended improvised break of Fairport Convention’s ‘A Sailor’s Life’ on Unhalfbricking. The guitar solo – either Lloyd or Verlaine – even bears exactly the same tone as Richard Thompson’s.”

It was a trick crucial to the billowing romance of Marquee Moon, but one forgotten as the more pervasive idea of Television as an urban band – grimy, streetwise, intellectually and culturally transgressive – became punk orthodoxy. This year, however, the possibilities of linking folk traditions with Verlaine and Lloyd’s flamethrowing have felt very much alive. A bunch of predominantly American guitarists like William Tyler and Steve Gunn, part of the underground scene that once had Jack Rose as its fulcrum, have started moving away from devout Takoma School studies towards a fuller electric band format. Most notably, Chris Forsyth’s recent Solar Motel proudly betrayed the fact that the Philadelphia guitarist had once taken lessons with Richard Lloyd himself.

To this micro-genre we can happily add Cian Nugent, a 24-year-old from Dublin. Nugent surfaced in 2011 with Doubles, a mostly solo acoustic album on VHF, which displayed uncommon virtuosity but not, perhaps, quite enough individuality to raise him above the serried ranks of John Fahey acolytes. This year, though, Nugent has significantly stepped up: first in an elevated jamming band, Desert Heat, also featuring Steve Gunn (their debut album on MIE Music, Cat Mask At Huggie Temple, is worth a listen, as is their live rip through the VU’s “Oh! Sweet Nuthin’” live at www.nyctaper.com). Now, following a seven-inch on Matador earlier in 2013, Nugent has made an LP with a group of fellow Irish musicians, christened The Cosmos, that reconfigures his music into expansive psychedelic folk-rock.

Not initially, mind. Born With The Caul begins with Nugent still alone, playing a languid acoustic blues called “Grass Above My Head” and waiting for his bandmates to discreetly slip, one by one, into the mix behind him. After about four minutes the pace picks up into a nimble rag, with Ailbhe Nic Oireachtaigh’s fiddle and Bill Blackmore’s woozy, good-time trumpet leading the brief carousing.

Good stuff, but it’s the album’s two other songs that really showcase Nugent taking flight. “Double Horse” starts, again, with a pensive solo, but soon switches up into candlelit psych-raga, with the guitarist affecting an elaborate, incantatory style reminiscent of Six Organs Of Admittance. As he adds faintly Celtic flourishes over the organ and viola drones, “Double Horse” increasingly resembles a cross between “Venus In Furs” and The Waterboys until, 10 minutes in, Nugent and Nic Oireachtaigh’s surging epiphanies move the whole production into the zone of “A Sailor’s Life”.

“Double Horse” stretches for nearly 17 minutes, but is trumped by the rolling electric “The Houses Of Parliament”, clocking in six-and-a-half minutes longer and moving with such invention and fluency that it seems much shorter. Nic Oireachtaigh’s work here has something of the elegiac tone of Warren Ellis, while David Lacey’s busy jazz drumming marks the piece out as closest to what Nugent achieved alongside Gunn and John Truscinski in Desert Heat. There are strong allusions to Television, too, and to another Television antecedent that rather undermined their punk credibility, the Grateful Dead. And amid all the instrumental revelations, there is a pointer as to where Cian Nugent’s bright quest might take him next: 10 minutes in, he hollows out a space in the jam to sing, quietly but affectingly, for what turns out to be less than a minute. Among his multifarious projects for 2014, it transpires, is a band called Cryboys; “My first song band where I’m writing songs and singing,” he says. “Which is a buzz.”
John Mulvey

Q+A
Cian Nugent
Can you tell us a bit about The Cosmos?
David and Ailbhe played on my previous record, but on this new one Ailbhe is sharing leads with me, which is great, as she’s a wicked player. Conor learned the whole set the day of his first gig with us, which was opening for the Magic Band. Just before we went on, Rockette Morton sat down next to us and said, “My name’s Rockette, how you doing?” An intimidating start.

Could you explain the title?
My friend Grace’s Auntie Ellen runs this Mythology Summer School on Clare Island, and Grace told me the story of the mythological character of Cian, who was born with the caul. I didn’t know what it meant, so had a look on Google Images and was disgusted, but really liked the folklore around it. Some babies are born with a membrane around their head, it’s quite rare, and traditionally it was considered a sign of good luck, that the baby was destined to greatness. People would keep the membrane and give it to sailors as a talisman to keep them safe at sea. One day I asked my mother, had she heard of this tradition and she calmly said, “Oh yeah, you were born with the caul. I kept it for a while but it’s been lost somewhere along the way.”
INTERVIEW BY JOHN MULVEY