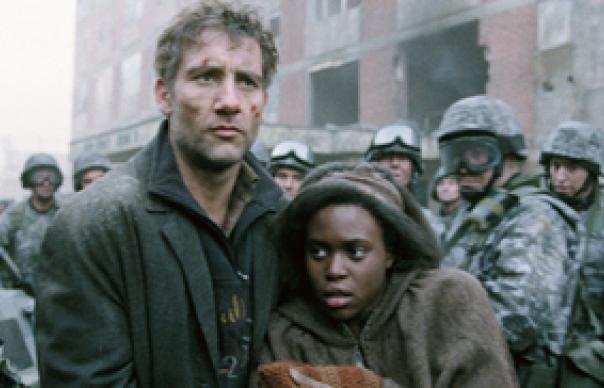 Based on PD James’s novel, Alfonso Cuarón’s futuristic feature is one of the darkest films of 2006, and arguably one of the most convincing British dystopia dramas ever. The scenario is a transformed Britain, only two decades from now, in a period when no children have been born for 18 years. With humanity plunged into despair, society crumbles worldwide, while Britain has become an Orwellian fortress society, with immigrants rounded up and transported to brutal dead-end prison camps. Clive Owen plays Theo, a weary former radical whose militant ex-wife (Julianne Moore) coerces him into finding safe passage for a young black refugee woman, Kee (Claire Hope Ashitey) – with whom, miraculously, hope for the future might lie. But the journey towards redemption leads via hell, through the heart of a Guantanamo-like camp situated in Bexhill-on-Sea – a considerably more menacing place in 2027 then it is now.

Children of Men is an arresting mix of road movie, breakneck adventure, science-fiction dystopia, and very un-British art film: the final sequences have a looming darkness that equals the doom-laden cinema of Bela Tarr. Cuarón departs from the somewhat staid original novel to produce a darker and even more coherent vision of a future Britain – and by extension, a future world – that’s literally running out of tomorrow. The film’s first section fills us in with extraordinary concision on what’s gone wrong with the world, and watching it on DVD should help eagle-eyed viewers sift through the masses of information that Cuaron provides: this is a film in which every half-glimpsed poster, TV ad, news headline has its story to tell.

Once the film hits the road, the storytelling brio of Cuaron and his Director of Photgraphy Emmanuel Lubezki come into their own. The scene in which Theo and co are ambushed as they drive down a country road is extraordinary: as they’re fired on by bike-riding gunmen, then escape from police pursuit, you’re so caught up in the action that you could easily miss the fact that everything is done as a single shot from inside the car, with the camera swivelling frantically to catch the action. Similarly, the hand-held long takes of the climactic battle scenes, as the Bexhill camp becomes a war zone, are breathtaking in their intensity.

But this is also a film with a great deal of tenderness and humour. Clive Owen’s brooding, beaten-down hero may seem something of a cypher at first, but gradually Theo’s hard-bitten exterior reveals its tender cracks, and he emerges as the sort of moody, thinking tough guy that Owen – as we saw in Croupier – excels at playing. The scene-stealer, however, is Michael Caine, giving one of his richest performances as Theo’s friend Jasper, a spliff-waving diehard radical, embodying old-school defiance and satirical joie de vivre; you can’t imagine anyone but Caine bringing quite such curmudgeonly mischief to the role.

It’s a long leap from Alfonso Cuarón’s last gig (Harry Potter and the Prisoner of Azkaban) to here, and even further from his Mexican coming-of-age travelogue Y tu mamá tambien, but this is arguably his most confident film yet. Despite a more-or-less upbeat ending, you won’t exactly emerge glowing with good cheer, but that’s as it should be. Children of Men does what the best dystopia drama should do: it makes you look at the world around you and shudder.