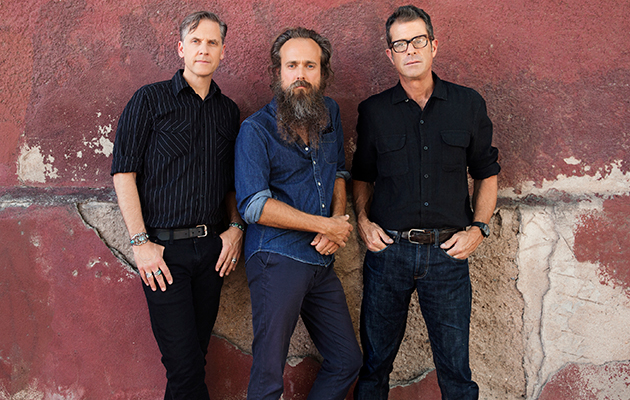 Sam Beam and the Calexico pairing of Joey Burns and John Convertino always meant to get back together after 2005’s joint EP “In The Reins”. Burns appeared on Iron & Wine’s rapturous 2007 LP The Shepherd’s Dog, with Beam later repaying the favour by singing on a couple of Calexico albums. There was the odd festival meet-up too, but it wasn’t until late last year that both parties finally reunited in earnest.

Unlike “In The Reins”, on which Calexico essentially served as Beam’s backing band, Years To Burn is a much truer collaboration. Recorded at Sound Emporium, Cowboy Jack Clement’s old place in Nashville, there’s a roving, exploratory feel to the best songs here. The punningly titled “The Bitter Suite” is the album’s notional centrepiece, a three-piece movement in which trumpeter Jacob Valenzuela turns an Iron & Wine lyric into a Spanish lullaby before it slips into a loose blues groove that fades into Beam’s gentle meditation on acoustic guitar.

It’s all deftly constructed and beautifully realised. And props to steel guitarist Paul Niehaus, piano player Rob Burger and bassist Sebastian Steinberg – who make up the rest  of the studio ensemble here – for making a  virtue of understatement. Similarly, the improvised “Outside El Paso” takes Convertino’s adopted border-town home as inspiration for  an abstract instrumental that changes moods like the weather.

Some songs tend to play it safer, lessening  their impact in the process. Both “What Heaven’s Left” and “Follow The Water”, for instance, sound like Beam in full Iron & Wine mode, wrapping his signature chords in warm arrangements and feathery harmonies. Closing effort “In Your Own Time” is more effective in shared company. An early Beam demo dating back nearly 20 years, the revamp finds him and Burns swapping lead vocals on a sinuous country blues with added tejano flavour. Notwithstanding Beam’s earthy lyric – “Smoke like a freight train/And fuck like a dog” – it’s essentially an ode to companionship and making the best of opportunity. And a fitting  way to bow out of this genial alliance.