The desert rockers soak up some New Orleans spirit, with refreshing results... 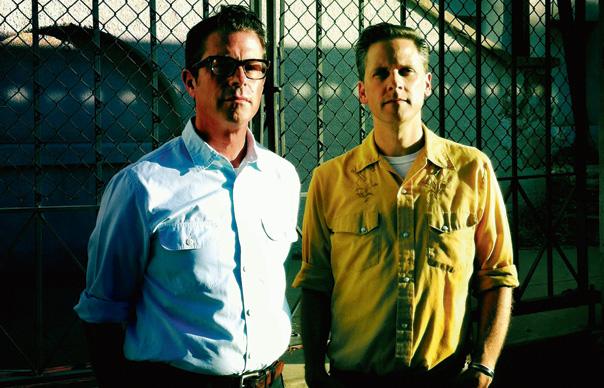 The desert rockers soak up some New Orleans spirit, with refreshing results…

The seventh album from Joey Burns’ and John Convertino’s border band takes its title not from the Algerian capital, but the rather less storied district of New Orleans where the pair spent time recording in a converted Baptist church. At first the association seems incongruous. Calexico evoke a very different kind of America to the one commonly associated with the swampy humidity of Crescent City. Deriving their name from a town on the US-Mexico border, their music is redolent of dry heat, vast blue skies, mariachi horns and Morricone’s cinematic desert drama.

As it turns out, a new location hasn’t changed these hallmarks to any significant degree. After the misfiring sound-shift of 2006’s Garden Ruin, on their last studio album Carried In Dust (2008) Calexico seemed to accept that what they do best is make widescreen frontier music created on the cusp of cultures and genres. There is no shortage of this on Algiers, not least on the twanging instrumental title track and the archetypal “Splitter”, a propulsive anthem punctuated by crisp trumpets and an eminently hummable chorus. “The Vanishing Mind”, meanwhile, is a slow, red Wild West sunset painted in lowering strings, mournful horns, pedal steel and rattlesnake drums.

However, some sense of New Orleans has seeped in. Burns and Convertino aren’t marching down Bourbon Street with a sousaphone, but parts of Algiers tingle with the city’s distinctive atmosphere of mystery, superstition and voodoo vibes. On “Maybe On Monday” – a wonderful song about a love that has outlasted its usefulness – Burns sounds positively cursed as the thick, heavy music sends black sparks flying. Rising to a swirling, Doorsesque crescendo, the outstanding “Sinner In The Sea” is another dark fable located – auspiciously – “between Havana and New Orleans”. On Tucson-Habana, their 2010 collaboration with Spanish singer Amparo Sanchez, Calexico worked at Havana’s legendary EGREM studios. Algiers makes the Cuban influence more overt than ever, not only on “Sinner In The Sea” but on the title track and “Puerto”, where lithe salsa rhythms mesh with mariachi horns and the imperious voice of their long-standing collaborator, Depedro’s Jairo Zavala, who crops up again on the stately “No Te Vayas”.

Set in the Dominican Republic, “Puerto” sees the protagonist heading for “the land up north”. Everyone on Algiers seems to be in motion. Burns’ characters are economic and emotional migrants, like refugees from the classic Tex-Mex border ballad “Across The Borderline”. He gives voice to their concerns – on “Better And Better” pondering, “Is it better than staying back home?” – while trying to re-establish ancient cultural connections, movingly describing the ocean floor on “Sinner In The Sea” as “a sunken bridge between you and me”.

Where Carried In Dust was conceptual and utilised many additional vocalists, Algiers feels more intimate. This is a unified, closely-stitched record, leaning towards the downbeat. “Epic” makes for a disarmingly low-key opener; “Fortune Teller” is so gentle it almost floats, marrying gentle Simon & Garfunkel harmonies to the warm strum of something like Whiskytown’s “Houses On The Hill”. Quiet, spare and short, “Better And Better” recalls parts of Simone Felice’s recent solo debut while “Hush” fulfils the promise of its title, the layered atmospherics, soft whoops and evocation of “orange blossom days” combining to intoxicating effect.

For a band who occasionally seem happy to work within well-worn parameters, it’s refreshing to see Calexico stretching out. “Para”, inspired by Terence Malick’s The Tree Of Life, ripples with all the tension and turmoil lurking “below the water line”. Unsettling and serpentine – think “Paranoid Android” relocated to Monument Valley – like much of the rest of this record it’s a slow-burn. The initial impact may be somewhat muted, but Calexico’s music has always crept rather than roared into the listener’s consciousness. Live with it a little and Algiers reveals itself to be a warm and compassionate affirmation of the band’s deep-rooted DNA, with enough fresh twists to keep this compelling story moving forward.
Graeme Thomson

Q&A
JOEY BURNS
Carried In Dust was broadly conceptual. Is Algiers?
No, we wanted to make a personal record. It wasn’t about making a big connection to local New Orleans musicians, it was more about how far deep we could go. We’d done quite a lot of guest vocals on the last album, so we thought let’s do something different. We’d been doing soundtracks [Circo, The Guard], keeping things more sparse, and we carried that through on Algiers.

What did working in New Orleans bring?
We’ve always loved the city. There’s so much history there, so many ghosts, even vampires. We recorded in a studio in this unassuming area, in an beautiful, old, wooden former Baptist church with a great sense of musical and spiritual history. We were tapping into the vibe of the studio, the district, and the city, which is a portal between north and south America, and old world and new world. It totally rejuvenated us. It would be great to see this as start of a series of travelling and recording. Cuba would be fantastic, but I’d love to go even further, to Greece and around the Mediterranean.
INTERVIEW: GRAEME THOMSON