BUDDY HOLLY – NOT FADE AWAY

The complete studio recordings and more... 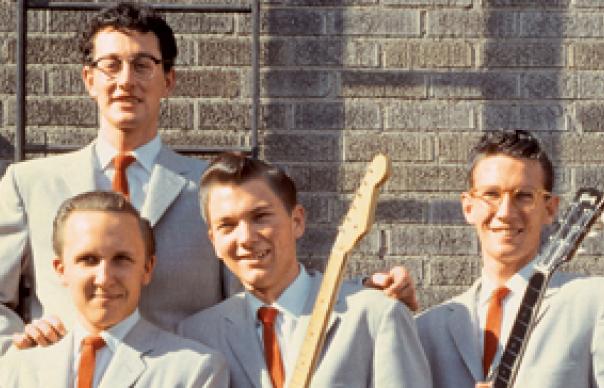 In a 50-year recording career, Buddy Holly, who died last Christmas at the age of 74, influenced everyone from The Beatles to Bob Dylan, and worked with everyone from, well, The Beatles to Bob Dylan (he famously turned down Kanye West for “reasons of old age”). He leaves behind a legacy of more than 40 albums, all of which were both genre-defying and genre-defining. Inducted into the Rock’n’Roll Hall Of Fame three times – as a solo artist, as one of The Crickets, and as a member of Holly, Diddy, Nash & Young – Buddy also made the headlines when he refused the chance to join the Traveling Wilburys, telling George Harrison, “That’ll be the day…”.

We wish. In real life Buddy Holly made just three albums and released hardly enough singles to fill out one side of a Greatest Hits collection. Those few songs alone – and the ones remixed, buffed up and orchestrafied after his death, at 23, in a plane crash – were enough to literally save rock music from its oncoming novelty death as everyone from, yes, The Beatles to Bob Dylan, along with The Rolling Stones and a quarry of other lesser acts, realised that you could be melodic, witty, and intelligent, and still rock like a burning caveman. We can’t ever really know if Holly’s early brilliance would have sustained a long career (although I will always continue to have a slight fantasy about Holly not joining the Traveling Wilburys), but it’s reasonable to suppose that he would have continued to be a very major figure in popular music.

In the event what we have is literally this, 203 tracks which are apparently everything he ever recorded in a studio, or in several cases, an apartment. There are instrumentals here, there are early country and western numbers, there are fragments of conversation with his wife Maria Elena, there are tracks overdubbed for posthumous release from the 1960s and the 1980s, there are outtakes – goodness me, there are outtakes – but most of all, there are some of the most three-dimensional, living, enthusiasmic (it’s a word now) songs in the history of popular music. These songs leap at you like jangling Labradors with their sheer joy in just existing. “That’ll Be The Day“, “Peggy Sue”, “Maybe Baby”, “Rocking With Ollie Vee”, “Rave On”… songs that must have sounded like classic rock’n’roll the day they were released but also redefined what rock’n’roll was.

Yes, you can hear someone who loved Elvis Presley and Hank Williams in these songs (and you can also hear tons of what the best Beatles songs would be in these songs), but you also hear an authentic new voice, someone who took the sounds of Texas, of R’n’B, of country and everything on the radio and made his own music. Even the lyrics sound like nothing else – there’s a brilliant self -confidence even in potentially soupy ballads like “True Love Ways”, while the sheer shagdaftness of “Oh Boy!” proves that girls do make passes at boys who wear glasses.

The casual buyer – a phrase which always conjures up in Uncut terms someone who only buys two Lambchop albums a week and is wondering if they should get those Flaming Lips records where you need 10 CD players to play them – will point out that, musically, all of the above indicates that you and me and he and she should surely be perfectly well off with a decent Buddy Holly Greatest Hit s compilation. And I can only say yes to that: unlike other artists whose outtakes show massive leaps and experimentation before coming to a final, musically shattering, releasable conclusion, Holly tended to rework songs in not massively different ways and so the many, many outtakes of “Think It Over”, “Have You Ever Been Lonely” and “Don’t Come Back Knockin'” are very much for the completist. But if you want to hear, and maybe you should, everything recorded by the greatest popular songwriter never to have the career he deserved, this is very much the place.