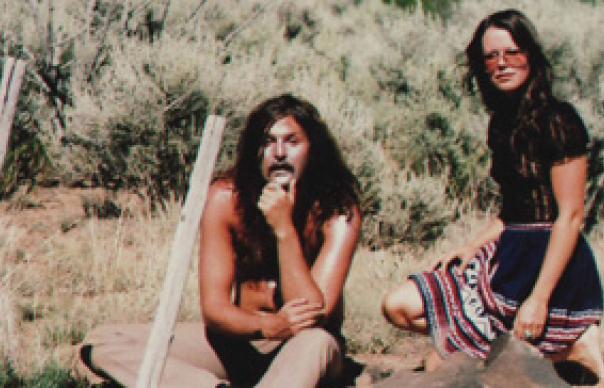 In Legends Of The American Desert, a survey of the South-Western States, Alex Shoumatoff discovers a network of communes that have flourished in the bone-dry wilderness of New Mexico since the 1960s. Here, spiritual adventurers have found a place on the mesa where they can live off-grid and reconnect with the earth, where “ancient souls can be reborn”. Shoumatoff visits a militant lesbian commune called Arf (so named because of the proliferation of dogs; male ones must be neutered), where a woman called Riverbend tells him, “We celebrate the equinox and the solstice. Last night the hills were all dressed in rainbows.”

It’s a vision generally shared, you suspect, by two relative newcomers to New Mexico, Rachael Hughes and Naybob Shineywater of Brightblack Morning Light. Their third album, Motion To Rejoin, was recorded using only solar power at a remote adobe dwelling. Here they grow their own food (“We ate 65 per cent of our food from the garden this summer,” Shineywater proudly tells us), study “sacred herbs”, go hiking a lot, and make a sticky, profound music. A music of hot earth grooves, soul chants and liminal horns, driven by the plangent vibrations of Hughes’ Fender Rhodes and Shineywater’s hypnotically reverbed whisper. He sings of crystals speaking, of the deep wisdom found in lands where teepees once stood, of canoes painted with rainbows to give them power.

And plainly, if you’re allergic to hippy proselytising, Brightblack will probably drive you quickly into the embrace of Babylon. The clothes and notionally psychedelic patter might be currently fashionable, thanks to the likes of MGMT, but Hughes and Shineywater are about as far from the hipster irony of those Brooklynites as you can get, both geographically and ideologically. Before they moved to New Mexico, the pair lived in tents in a California redwood forest, where the ewok scenes in the Star Wars movies were filmed. They have banned military recruiters from their gigs, encouraged fans to bring crystals to shows, and been active in environmental groups like Friends Of The Eel River. On their last European tour, Shineywater performed with an ancient arrowhead in his mouth, to let his “own sung words and breath touch this stone before European ears could hear them.”

It is not hard to make fun of this band, even if you’re broadly sympathetic to their beliefs. But the atmosphere they create in their music is so heady, so insidious, so rooted in their environment and their Utopian ideals, that the whole package becomes compelling.

Given all the rhetoric, you’d probably imagine Brightblack to be an acid-folk band of some stripe, not least because Otto Hauser, from Devendra Banhart’s band, provides the supernaturally discreet drumming. But actually, the sound this Alabama-born pair formulated on their second album, Brightblack Morning Light (2006), is a soupy, reductive take on Southern soul. Uncut compared that record to Spiritualized (particularly when they co-opted Dr John’s gris gris on “Cop Shoot Cop”), and to “the Muscle Shoals crew playing beneath a giant Navajo blanket”. Those reference points still hold good this time, though Motion To Rejoin is, if anything, even slower and more righteous than its predecessor. Shineywater’s incantations are distant and dazed, given body – especially on “Oppressions Each”, a groggy call to revolution – by the gospel ardour of Regina and Ann McCrary, the former a backing singer for Dylan through the late ‘70s and ‘80s.

This is funk played at the pace of a dirge, with Hughes’ spare, bluesy Fender Rhodes being tracked by a horn section whose presence is gaseous rather than emphatic. At times, as on “Summer Hoof”, it all dissolves into ambience, and the acknowledged influence of a minimalist like Terry Riley becomes apparent. But by “Past A Weatherbeaten Fencepost”, they’ve stealthily accumulated a palpable heaviness and tension.

On “A Rainbow Aims”, that edge is leavened by a Strawberry Fields Mellotron, but it’s a rare influence from beyond the psychogeographical borders of the American South. Motion To Rejoin is imbued with such a rich sense of place, it eventually emerges as an analogue to another lovely record from 2008, Bon Iver’s To Emma, Forever Ago. That album was created in a snowbound cabin in Wisconsin, a wintry opposite to the baked retreat of Brightblack. But the feel of a music made in isolation, shaped by the extremes of nature, is just as striking. “Keep the spirit clean and let the high times roll,” Shineywater implores at the end of “Past A Weatherbeaten Fencepost”. After Motion To Rejoin has been on repeat for a few days, you’re very nearly tempted to head off into the wilderness and join him.

Can you tell us about your background?

I’m from Alabama originally, and grew up with an appreciation for being out of doors. Rachael and I have a dedication to making music in rural, wild environments, while also focusing on ecological recovery. I like it when music is a reflection of a region’s lifestyle. America has more culture than most would like to admit. In the west, the wilderness is very much alive. Wilderness is the only true freedom. It is ours to honour, respect and party with.


Can you tell us how you moved to the mesa?


New Mexico is the land of enchantment. Home of the Pueblo nation, the only successful North American resistance to European conquest. That means these people around here have been maintaining ceremonial dances for thousands of years. History and mainstream culture would have you believe that all the Indians are dead, along with their language and religion. However this is a lie. We should all begin looking to ancient cultures.


In “Oppressions Each”, you talk of being “beat down by police”. Did that actually happen?

Sure, yes. I was beaten by San Jose police on Valentine’s Day, the day of the first protest in San Francisco against the Iraq war. I sat in jail, completely innocent, and my charges of resisting arrest were dismissed on George Orwell’s birthday.

How do you feel about being stereotyped as hippies?

I wasn”t aware of that. Remember that LSD came from America. No culture to date has devised such a revolutionary and alternate experience. The ‘60s also granted women’s right to vote, racial equality and sexual equality. There are lessons to be learned from their mistakes, however we must, should and will embrace these mind-liberating tools in order to move forward. Not label them as bad, when the folks doing the labelling are approving bad wars, for bad oil, for bad excess.