Long-lost document of the pre-fame Bob: even then, a mercurial live performer... 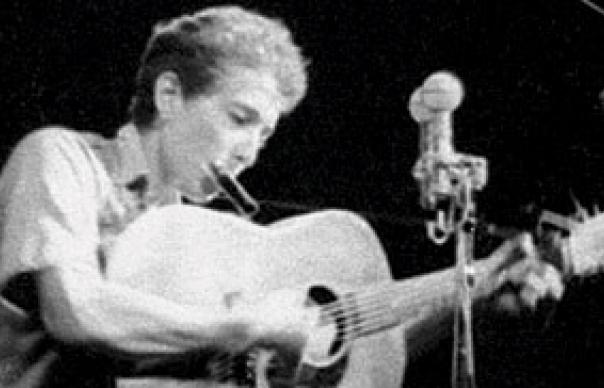 On May 10, 1963, 21-year-old Bob Dylan played a folk festival at Brandeis University, a Jewish college in Waltham, Massachusetts, on the outskirts of Boston, just as his career was about to explode. Now, thanks to a reel-to-reel soundboard tape recently discovered in the archives of the late music critic Ralph J Gleason, we have a snapshot of this game-changing artist on the verge of being recognised as such.

This was just before Columbia finally got around to releasing The Freewheelin’ Bob Dylan, the far more revealing and successful follow-up to his anaemic-selling 1962 self-titled debut. That summer, Peter, Paul & Mary’s cover of “Blowin’ In The Wind” would top the US charts en route to becoming an anthem of the Civil Rights and anti-war movements, while his stunning set at the Newport Folk Festival would irrevocably transform folk music, previously the province of clean-cut journeyman groups like The Kingston Trio, The Brothers Four and The Highwaymen. But the Bob Dylan who headed up to Brandeis was one of the more obscure performers booked for the festival, his prospects seemingly further dimmed by his woolly bray and atonal harmonica playing.

We’ll never know whether Dylan gave a thought to where he was playing, or whether the Brandeis underclassmen who got their first taste of his music that day had any inkling that this rustic from the upper Midwest was also Jewish. What we do know is that, by this time, his sensibility was fully formed and he was brimming with confidence, enough so that his decisions were unsullied by any external pressures. By the time he’s finished the first number, a folk chestnut he’d reconfigured as “Honey, Just Allow Me One More Chance”, Dylan appears to have gauged his audience and figured out how to entertain them, captivate them and astound them, all the while amusing himself in the process.

Without any preliminary comments, he launches into “Talkin’ John Birch Paranoid Blues”, and within two or three verses fully engages the initially indifferent crowd with this caterwauling send-up of right-wing extremists. Given the composition of the audience, this is provocative material indeed, with the clueless narrator’s references to Hitler’s genocide and the McCarthy era’s blacklisting of many largely Jewish intellectuals. They eat it up, peals of laughter rolling toward Dylan onstage with every verse-resolving punchline, as he does what amounts to a stand-up routine in rhyme. (Just two days later, Dylan would walk out of a scheduled appearance on The Ed Sullivan Show – his first shot at national exposure – when the producers refused to let him perform this song.)

He then undergoes a radical mood shift from sociopolitical humour to Shakespearean high drama in modern dress with “Ballad Of Hollis Brown”, which tells the story of an impoverished South Dakota farmer who goes over the edge, killing his wife and children before turning the shotgun on himself. Dylan progressively ratchets up the tension during the seven-minute performance, the crowd now hushed, rapt. With barely a pause, he undergoes another transformation, from tragedian to protest singer, with “Masters Of War”, the audience now completely in his thrall. The first set ends with sustained applause punctuated with cheers. In his later three-song performance, he opts to sandwich the satirical “Talkin’ World War III Blues” and “Talkin’ Bear Mountain Picnic Massacre Blues”, each of which finds broad humour in human foibles, around the Freewheelin… lynchpin “Bob Dylan’s Dream”, a shimmering vision of humanity at its most noble and precious. Most of those in attendance had no idea who Bob Dylan was before today, but they’ll never forget him now.

If Live At The Gaslight from October 1962 – long-bootlegged but officially released in 2005 – showed the young Dylan in his element, then this recording demonstrates what he was capable of out of his element: a skillful entertainer working the crowd, reaching into his trick bag and pulling out just what he needs to get the job done. And whether he’s being perverse or instinctual, he doesn’t even bother to break out any of the indelible showstoppers that are by this point in his arsenal. This is the young Dylan in microcosm, marching to the beat of a different drummer, and taking no prisoners.
Bud Scoppa