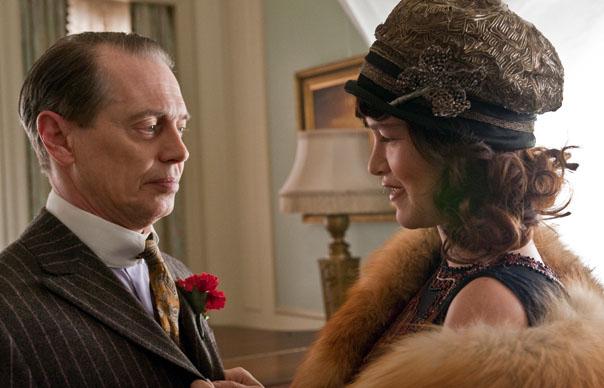 Whenever he was at his most distracted, Tony Soprano generally made his way to the Boardwalk. Though he never actually left the house, in his troubled imagination, the anxious mob boss was frequently condemned by his conscience to return to the stomping ground of Bruce Springsteen, the shoreline at Asbury Park, New Jersey, there to confront his demons: murder victims of his regime; strange visions; on one occasion, a fish whom he became convinced was his onetime colleague Salvatore “Big Pussy” Bompensiero, and with whom he had a conversation.

Such multi-layered, innovative post-modern and above all engrossing storytelling is not something you’ll often find in Boardwalk Empire, though at first glance many similar ingredients are present. Among them, there’s nefarious activity in a coastal location (the series is set in prohibition era Atlantic City, in which the resort came into its own as a hotbed of illegality). There’s producer Terence Winter, a guiding light of The Sopranos as a writer. There’s quality acting talent (headed by Steve Buscemi, another Sopranos vet, here playing Enoch “Nucky” Thompson, about whose New Jersey empire we are ostensibly talking). There’s Martin Scorsese, who exec produces and directs the opening episode. Then there is, of course, the Boardwalk itself.

This, understandably, given the considerable expense involved in building it, is something of which the show is justifiably proud. Prior to the show’s release, HBO released a promotional stop-motion film showing the construction of this $5million principal set. On one level, it was a fascinating glimpse behind the curtain. On another, it brought an unwelcome note of reality to our not-yet-actually-suspended disbelief, as if we had accidentally skipped to the DVD Extras before watching the main feature.

A tale rooted for the most part in the true story of Atlantic City’s nefarious rise, Boardwalk Empire introduces us to the architects of that rise, some real, some not. The sketchy morality of institutions and the corruption of individuals that exploit them for their own ends is the familiar theme here. Nucky Thompson is Mayor of Atlantic City. Publicly, he’s a supporter of causes and defender of the weak. Privately, he’s a womanising villain, albeit a complex one – a complexity Buscemi effortlessly inhabits. He and his jawdropping mistress Lucy Danziger (Paz De La Huerta, the actress from the Lana Del Rey video) provide edgy HBO content of an indoor kind, while on the sly, he quietly becomes intrigued by recent immigrant Mrs Schroeder (Kelly Macdonald). The picture is filled out by Nucky’s enforcer and WWI veteran, Jimmy Dormody (Michael Pitt, looking these days more Jack White than Kurt Cobain) and magnificently, investigating agent Nelson Van Alden (the superb Michael Shannon). These people are all in transitions of a kind, but all in a way, playing their own angle. Strange to say for a 12 part series, but somehow for all the class on display, all of which makes this very watchable, there’s not enough actual story.

In a way, Boardwalk Empire is a victim of HBO’s success. It’s trying to turn the clock back, not only to the prohibition era (which it does successfully enough) but also to a time before mobster movies (which it cannot hope to do). Since the 1970s, our minds have been blown by the resourcefulness with which racketeering and mob violence has been dealt with on screen. In The Sopranos, the mood and quality of the piece was heightened either by knowing reference to these works, or offering genuinely new takes on familiar situations. The writing and direction of Boardwalk Empire leave Nucky and his crew prisoners of their own era, their situations already over-familiar to us. An early twentieth century automobile at night? You’re right: it will soon be riddled with bullets.

Boardwalk Empire might be best described, along with David Simon’s Treme as the first post-HBO series, in which we have come to accept long form storytelling as a given. In any meaningful way, however, the show doesn’t deliver anything like the quality of The Wire, The Sopranos or even Deadwood, whose plot it closely resembles. The story, at times seems simply to be struggling to sustain itself.

As Tina Fey’s character Liz Lemon says when delivering a reality check to a cast member in 30 Rock “This isn’t HBO. This is TV.” It’s a valuable reminder about delivering what people want to watch. For all the painterliness of direction, historical accuracy, TV still needs to fish us in. For all the top performances, somewhere in among all the bignames, someone seems to have forgotten how that’s done.

EXTRAS: Commentaries, Making Of…, featurettes including one on Atlantic City and another on creating the Boardwalk itself.
John Robinson