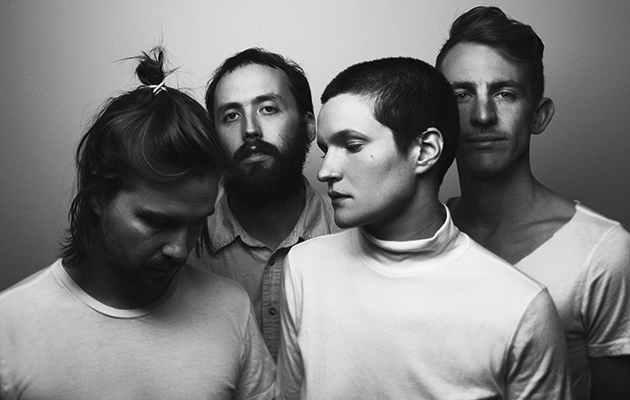 Adrianne Lenker had an eventful childhood. She was raised in a religious cult before her parents fled its grasp, then she almost died after she was hit on the head by a railroad spike. Themes of surrender, escape and sudden violence run throughout Capacity, the second album from Lenker’s four-piece Big Thief, but one which is ultimately about the capacity of humans to love each other, sometimes suffocatingly, as partners, parents and children.

The band formed after Lenker arrived in NY from the Midwest and teamed up with guitarist Buck Meek. The duo recorded a pair of folky albums before recruiting a rhythm section and releasing 2016’s excellent Big Thief debut, Masterpiece. Lenker, however, is chief songwriter and spiritual core. Her voice is the dominant instrument, her vocal melodies provide the musical adventure and her lyrics are the relentless focus.

Lenker has noted the influence of intimate songwriters such as Elliott Smith and Iron & Wine on her work, while Meek talks of Roy Harper, Fleetwood Mac, Sibylle Baier and Dan Reeder, but it’s too easy to describe Big Thief as simply a folk-rock band. The band have absorbed ideas from the NY indie scene in which they are embedded, so a song like “Coma” may begin with a melodic acoustic strum, but soon drifts into fuzzy drone, while the title track is a reverb-laden take on “Moon River”, and “Great White Shark” wriggles to a dance-indebted beat. The ghost of The Breeders can also be heard, most notably in the warping rhythm of “Mythological Beauty”, one of the most clearly autobiographical songs on the LP.

“Mythological Beauty” is about family, with Lenker singing with disarming frankness about her mother – “Seventeen you took his come/And you gave birth to your first life.” She also sings about her own childhood accident from the perspective of her mother. The nail is not the only sharp object to feature on Capacity; there are vampires and sharks, road accidents and knives. Violence – physical, emotional, real, perceived – is frequent. So too is the contrasting comfort of the body, of giving yourself to another, and the dangers and rewards this can bring. These themes come together on “Watering”, which occupies an ambiguous place between sexual violence and violent sex. On the title track, Lenker sings, “Do what you want with me,” and it’s as much a challenge as invitation.

That ambiguity and intensity is there from the start. To a deceptive backdrop of gentle acoustic picking, “Pretty Things” is a seductive lullaby, Lenker singing of a sexual encounter but warning “There’s a woman inside of me/There’s one inside of you, too.” The gender fluidity continues in the dramatic “Shark Smile”, a sly recasting of “Leader Of The Pack” that opens with discordant flurries of psychy guitar but plays out like Springsteen shorn of bombast and packing a deadpan dénouement. Big Thief rarely go for such straightforward narrative and “Capacity”, set to clanging guitars, sees Lenker tackle self-belief, while the Belly-like “Watering” seems to be about a stalker committing rape and murder, but climaxes with a command to “leave your bedroom light on/I live to watch you undress”. “Great White Shark” is distinguished by a choppy crescendo and some delicious, unpredictable vocal melodies, and is followed by the “China Doll”-like “Objects”, with Lenker singing again about the extremes of love, while Meek delivers a rippling guitar line.

After the summery jangle of “Haley” comes “Mary”, a lovely country lilt set to piano with a dexterous vocal performance, where the rhythm of the language on the chorus recalls Nick Cave at his most authoritative. Finale “Black Diamonds” acts as a careful bookend to opener “Pretty Things”: over a gentle stop-start rhythm, Lenker describes the growing intoxication of love and what it might mean to give in to it. “Should I let you make a woman of me/Should I let you take the mystery from me?” she asks. “Come on, let me make a man out of you.” As so often with Lenker, it’s an offer that sounds a lot like a challenge.

Q&A
Adrianne Lenker
What’s the songwriting process for Big Thief?
I generally write the bones of the songs. I bring something to the table at practice and the band begin to write their parts. Usually it all happens at once. Sometimes the arrangements come out quickly and other times it takes us weeks or months to figure out the first version of an arrangement.

There seems to be a constant theme of surrender – giving yourself completely to somebody. Is that something you’d recognise?
I think there is a desire for a certain type of surrender communicated, but not necessarily to give myself completely to anyone. There is a desire to embody the full capacity of myself, to unfold and become myself, and to be able to share that. Maybe part of that process r equires surrender. But much of the theme feels more like cold water on the face, waking up within the experience of life, asserting myself, my own strength and power as a being, as a woman.

Are the references to knives, sharks and vampires a reaction to your childhood near-death experience?
The sharp stuff in the record is meant to juxtapose the soft stuff. We are fleshy, delicate and pulsating. The shark and the knife are not inherently sinister. The projection of human fear is the scariest thing that appears on this record. Even the energy of the vampire changes when nobody is afraid of it.
INTERVIEW: PETER WATTS