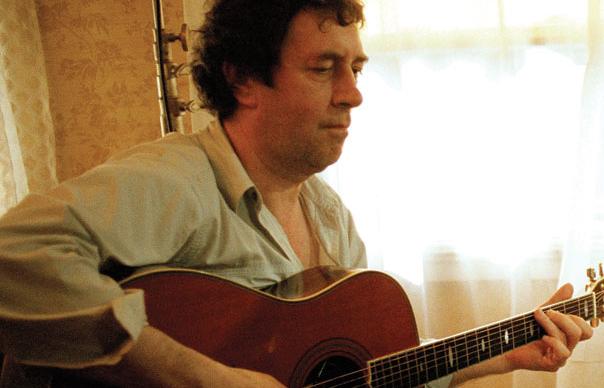 Even in a career that unfairly afforded him more time in the shadows than the spotlight, it would be hard to conceive of a time at which interest in Bert Jansch was lower than in 1992. Getting on for two decades since his last flurry of top-quality work for Charisma, and still a few years shy of his “rediscovery” by a younger generation of guitarists, it was then that the BBC broadcast an hour-long film called Acoustic Routes, focused, pretty much exclusively, on him.

As this reissued, feature-length edition of the film unshowily demonstrates: fashions change, but Bert Jansch did not. An older cousin of BBC4’s Folk Britannia, Acoustic Routes provides an impressionistic overview of the singer/guitarists of the British folk revival like Davy Graham, Wizz Jones, Ralph McTell, and John Renbourn, touching in with performances from all of them, generally in duo with Bert. All illustrate the same fundamental point: Jansch’s magnificent chops came packaged with a huge compositional talent, neither of these diminished by years of epic boozing or his career vicissitudes.

One thing Bert was not, however, was a talker. Nor do many of his contemporaries seem keen to grasp the nettle and elucidate just what it is that made Bert Jansch a cut above. Happily, the film devises an excellent solution to this: Billy Connolly. Connolly plays and knows a lot about folk music and its musicians, and as a near-contemporary avoids any kind of awkwardness with the subjects. As such, he becomes a kind of de facto narrator of a film that might otherwise simply feature some not especially talkative people playing the guitar extremely well.

He quickly gets to the point. Brandishing a copy of the “blue album”, the 1965 debut, Bert Jansch, Connolly enthuses about how this wasn’t just a great album, it was an essential hip artefact. At the time it came out, you would, he says, position it at the front of your stack of albums. You would do your best to emulate the handsome, glowering presence on the front of the album, noting the Spartan, bare-boards setting of the cover image. “Back then,” he concludes warmly, “Glasgow was filled with people with no furniture in their houses, trying to play ‘Strolling Down The Highway’…”

The furniture thing becomes something that Connolly riffs on throughout – noting of the cover of Bert And John, Jansch’s collaboration with John Renbourn he says Bert is now “so wealthy he has loads of furniture…” Of course, wealthy is another thing that Bert never was, and here we see 1992 Jansch rehearsing some new music with Renbourn in the kitchen of an unprepossessing Hammersmith flat. These are two men without very much in the way of material reward for their skills, still operating at a terrifically high level, Bert continuing to generate music that is immediately empathetic, the pair of them playing with staggering levels of feeling and technical grace.

Acoustic Routes doesn’t go in for at all for voiceovered linear biography, and instead tells its tale in just this kind of understated fashion. Along its meandering path, the film duly alludes to the existence of the Jansch/Renbourn jazz/folk supergroup The Pentangle, evinced by a duet with Jacqui McShee (extraordinary tie-dye, madam), but doesn’t tell you an awful lot about what that might have been like. It finds Bert (excitingly, in the company of Anne Briggs) returning to the sight of Edinburgh’s Howff club and playing a fantastic version of “Black Waterside”, and then giving a barbed but still vague answer to the question of how he feels about Jimmy Page essentially nicking that arrangement and crediting himself for it. There’s a US segment which yields a great performance of “Heartbreak Hotel” with Albert Lee and a moving if uneventful blues summit with Brownie McGhee, one of Bert’s heroes.

The offhand tone of the thing is probably best captured in a London sequence where Bert talks about Les Cousins, the London folk scene and Bob Dylan’s fleeting appearance on it in 1963. It catches up with Wizz Jones, Al Stewart and Bert – three guys in the ironed jeans and white tennis shoes stage of their lives. They have a chat and a bit of a play with Martin Carthy, and walk the Soho streets they knew as young men. They talk Paul Simon and Jackson C Frank. “I took Bob Dylan in there,” Bert then tells Wizz, indicating a pub function room. “Did he play?” asks Wizz. “Nah,” says Bert, “he was too stoned…” The pair then drop into a guitar shop to buy some strings.

For a lesser musician, in a more on-message film, this might all have been a rather bigger deal. Not for Bert Jansch: a man whose head wasn’t easily turned, and someone who focused on what he needed to do, and then simply went about getting it done.
JOHN ROBINSON