Belle And Sebastian – Girls In Peacetime Want To Dance 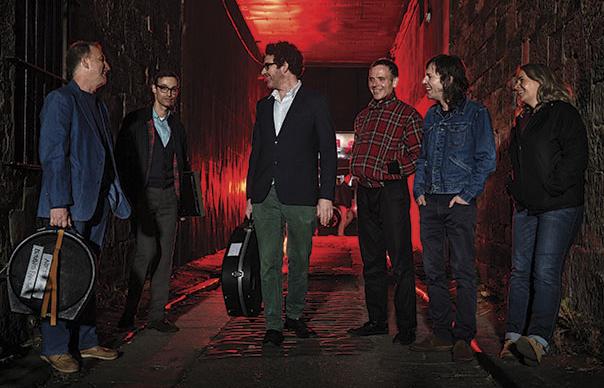 The opening song of Belle And Sebastian’s ninth album proper is about the darkest time in Stuart Murdoch’s life. Towards the end of the 1980s, as his teens turned to student twenties, the singer, songwriter, guitarist and, more recently, screenwriter and director, was diagnosed with myalgic encephalomyelitis, or Chronic Fatigue Syndrome. For seven years, Murdoch was isolated and suicidal, consoling himself with ‘60s pop and heavy metal, dreaming of being able to go out with girls, pondering the existence of God. It’s a pit of youthful despair he writes about, for the first time, in “Nobody’s Empire”, crediting ‘”my father” and an unnamed female best friend for saving his life and allowing him to “leave that vision of Hell to the dying.”

Murdoch has spoken in public about the CFS years many times. But its significant that only now, 18 years after he formed Belle And Sebastian over cups of tea in a Glasgow café, has he chosen to write a song so nakedly autobiographical. In the four years since the mediocre Belle and Sebastian Write About Love, the band have parted company from Rough Trade and signed for their third label, the perennially hip American imprint Matador, while Murdoch published a collection of his online diaries, The Celestial Café, and, wrote, produced and directed his first film, God Help The Girl. The band’s leader is now a 46-year-old husband and father with a portfolio career and a band who, with the crucial part they played in Murdoch’s recovery to rude health, perfectly dramatise the healing power of making music. Girls In Peacetime Wants To Dance feels like a creative rebirth for a band who were beginning to feel like nothing more than the day job.

A plaintive couplet from “Nobody’s Empire” stands out and sets the tone for an album that feels horrified by the modern world yet simultaneously convinced that creativity is solace, solution and hiding place: “If we live by books/And we live by hope/Does that make us targets for gunfire?”
The themes that Murdoch himself suggests define the album are “the power of music and how much we need it. But also how the individual is affected by politics and media and the pressure that comes from the 24-hour news cycle.” In that context, the “bombs in the middle east” and “knives in the city streets” of the soft-rocking “Allie” and the “grubby little red MP/Yellow flapping hopelessly” while the Tory remains “The Cat With The Cream” over an ominous, unlikely fusion of Abba and The Velvets, are juxtaposed with the sheer wonder of making art celebrated in “The Everlasting Muse”, whereby hints of Getz/Gilberto are employed to sum up Murdoch’s career-long insistence that everything good about the world is inevitably feminine. “Enter Sylvia Plath” and “Play For Today” are bookish, smart and elegantly British over a disco beat, and you wonder why you never saw the B&S/Pet Shop Boys comparison before.

Meanwhile, fellow B&S members compliment Murdoch’s strong material with some of their finest contributions to date. Stevie Jackson’s “Perfect Couples” is resonant observation over kitsch lounge-funk, as our hero watches role model couples collapse and loses faith in everlasting love. But the album’s major earworm is Sarah Martin’s “The Power Of Three”, which has a synth and strings hook that breaks your heart while fine-tuning B&S’s uncanny knack for conjuring fantasies of swinging ‘60s girl-beat while sounding entirely like state-of-the-art pop.

New producer Ben H. Allen III does a sterling job of making Belle And Sebastian most stylistically eclectic record into something coherent and crunchily satisfying. Girls In Peacetime Want To Dance is one of those records which sees the artists going back to the past – even if it means revisiting bad memories – in order to remind themselves why they bother, and move forward. It’s the collective’s best since Dear Catastrophe Waitress, and sees off the potential chronic fatigue syndrome of being Belle & Sebastian for just a little too long.
Garry Mulholland

Q&A
Stuart Murdoch
Where does the album title come from?
“It’s a line from a poem… kind of a spare song title we had lying around. It felt like the right title to put with the images for the album cover, which came to me in a dream. The weird robot girl.”

“The Everlasting Muse” sounds like an attempt to sum up all your many songs about wanting to understand and worship women…
“Well, if it does, it wasn’t intentional. It was the first song that came along. I was in Switzerland at the end of a tour with the band, on a bicycle thinking, ‘God… I have to write! I have no idea where these songs are gonna come from.’ And I felt like appealing to ‘the muse’. Its not far away from the sentiment of an Abba song: you know, “Thank You For The Music”. I’m doing my best to flirt with the spirit of music.”

You took time off from B&S to make your debut as a screenwriter and director. Now God Help The Girl is out in the world, how did you find the process?
“In some regards, I found that I fit much more into the film world than the music world. With movie people you can talk about the whole gamut of life and emotion. But I do feel quite battered and bruised by launching something that I thought was so precious and guiding it through a commercial release without having the support of a record or film company. That could be quite dispiriting. So I’m happy to be back in the fold.”
INTERVIEW: GARRY MULHOLLAND