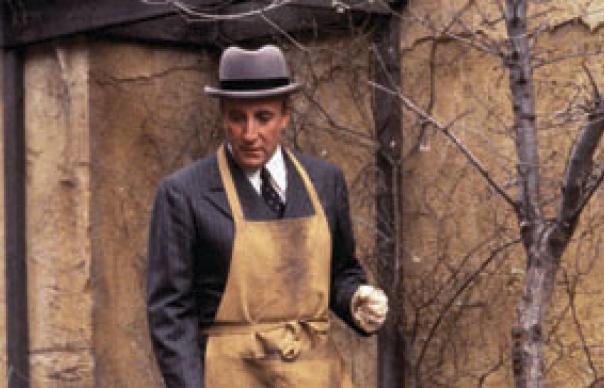 Among the directors who tried to turn Hollywood upside down during the ‘70s, Hal Ashby holds a special place. He’s almost a metaphor for the whole era: arriving in the early-70s with small, unexpected movies brimming with new energy; run aground by the end of the decade, burnt out on drugs and studio frustrations.

Ashby directed eleven movies before his untimely death in 1988. Mainstream acclaim came with 1978’s post-Vietnam melodrama, Coming Home, but his cult rests on four films: Harold And Maude, The Last Detail, Shampoo and this, the last weird flash before terminal decline, released, significantly enough, in December 1979. Revisit that quartet, though, and you’ll run into the central conundrum of Ashby’s career: it’s hard to locate the director’s presence at all. The success of all four films depends mainly on their writing and, in particular, their lead actor – none more than Being There, which frames Peter Sellers at his most restrained yet most brilliant, soloing with intensely quiet genius in his penultimate role.

Adapted from Jerzy Kosinski’s 1971 novel, it’s a modern-day fable, a spin on the emperor with no clothes, about a simpleton who gets mistaken for a guru. Sellers plays the vacuum at the centre, a man called Chance. His origins are mysterious. All we know is he has lived his entire life in the townhouse of a wealthy old man in Washington DC, and that he is not quite right. As the maid who raised him puts it: “No brains at all. Stuffed with rice pudding between the ears.”

For decades, the child-like Chance has tended the old man’s garden, but he has never ventured beyond its walls. His only contact with the world outside comes via the TV he obsessively surfs. One day, though, the old man dies, the house is sold and Chance – dressed in 1930s clothes inherited from the dead man – is cast out from his garden into the fallen world.

With Sellers stumbling politely from quiet mahogany sanctuary into the loud, dirty and profane streets, clicking his TV remote control at youths who confront him, Ashby has great fun with this sequence. But the real joke is still to come. By chance, Chance is swept up into the orbit of Ben Rand (Melvyn Douglas, who won an Oscar), a dying old industrialist billionaire and political kingmaker, known as the President’s closest confidante.

Sitting by Rand’s side, Chance’s silence gets mistaken for wisdom. When pressed for comment, he talks meaninglessly about the only thing he knows about: “As long as the roots are not severed, all is well. And all will be well in the garden.” It is gobbledegook, but, blinded by their sophistry and the fear of being seen not to understand, the political elite, and the audiences watching on TV, seize on his utterances as pearls of profound insight. As people constantly read their own meanings into Chance’s uncomprehending silence, the gentle idiot is soon carried to the verge of assuming the Presidency.

This was a deeply personal project for Sellers. He lobbied for the role since the novel was first published, but by the time he got to play the part, he was seriously ill. Being There would be the last film of his released before his death. Although nominated, he was reportedly devastated when he failed to win the Best Actor Oscar in 1980.

The real reward, though, lies in the incredible performance he left. Sellers has an impossible job: to play a cipher, a man who isn’t there, yet imbue that void with hints of something profound. Somehow, he pulls it off. With his little hat and umbrella he is as absurd, unsettling and enigmatic as a Magritte. Still and silent, a universe away from Clouseau’s clowning, he radiates.

This is Sellers’ film. Still, it was Ashby who came up with the last, magical touch that pushes the thing towards masterpiece: the final scene when, unobserved, Chance steps onto the surface of a lake, and obliviously begins walking on water.

It’s impossible to work out what the mysterious, mischievous image is supposed to convey. The scene sends shivers running backwards through the movie, connecting with Biblical references Kosinski litters through the plot – but the scene doesn’t exist in Kosinski’s book. Ashby apparently improvised it, inspired by Sellers’ reflection in a polished floor. He probably couldn’t tell you what it’s supposed to represent himself.

Maybe Ashby was something of a Chance: just there at the right moment, beside the right people. Watching Sellers stroll curiously across that beautiful grey lake, though, you can’t deny that it *feels* like it means something. And, if you like, you can probably find your own meaning in it. Perfect, really.