This time he’s a seasick singer on a ship of noise, apparently 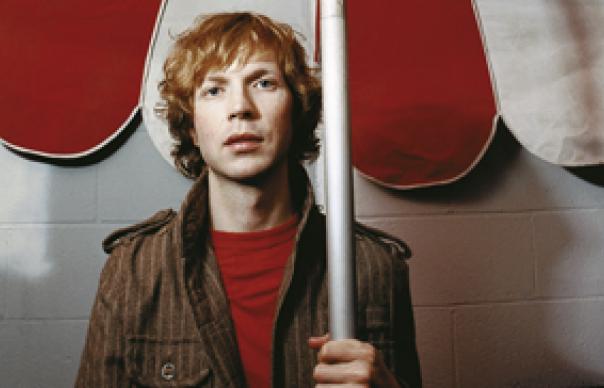 Though he may be styled as a maverick, Beck Hansen has stuck to a pretty predictable routine in the decade since Odelay. He releases a hip-hop/pop/blues romp, produced by the Dust Brothers, showcasing his post-modern hipster schtick. Then he follows it up with a faintly ethereal, largely straight-faced singer-songwriter album, helmed by Nigel Godrich. Fine records all, but a little formulaic.

Beck’s ninth album represents a twist, of sorts. As the schedule dictates, Godrich is on duty (The Dust Brothers having handled last year’s Guero). But instead of muted introspection, The Information finds Godrich complicit in one of Beck’s elaborate party projects. Stickers allow you to design the sleeve. Daft, cute, lo-fi videos for every track come on a bonus DVD. Puppets dance at the accompanying gigs. As for the music, the first half-dozen songs are terrific, and suggest Godrich has introduced Beck to a crateful of British music he’d hitherto ignored. The glittering synth-pomp of Simple Minds’ “New Gold Dream” is invoked by “Soldier Jane”, while “Loaded”-era Primal Scream are manifest on “Cellphone’s Dead” and “Strange Apparition”. Spooks from old Warp records squelch and hiss in the background throughout.

Over 17 tracks, however, something more compromised emerges – a spacey, live reconfiguring of Odelay’s sample-heavy sound. As Radiohead can testify, Godrich’s precise, airless style can add other-worldly gravitas to a conventional rock song. But another former client, Stephen Malkmus, described his work on Pavement’s Terror Twilight as putting “Nigel Godrich swooshing” all over it. Similarly, The Information often feels hygienised and missing some grit: the clanking metal percussion for “1000 BPM” is unencumbered by rust; the harmonica on “Dark Star” tastes resolutely spittle-free.

There are plenty of good things here, but there’s also a sense of artist and producer (and Godrich’s presence sometimes overwhelms even Beck) operating in default mode. Only “Horrible Fanfare/Landslide/Exoskeleton” totally fulfils the promise of risk-taking: a 12-minute sprawl that takes in ambient jams, disruptive electric guitar, shades of Serge Gainsbourg and Boards Of Canada, the shipping forecast, a conversation between Spike Jonze and Dave Eggers, and an edginess that breaks up the prevailing sheen.

“There’s a light beaming through the galaxy, telling you everything’s gonna be OK,” Beck claims on “Motorcade”. Once, we’d have taken it as fabulist irony. Now, the thought occurs that it may be Scientologist rhetoric. It’s a paradox that could usher in a tricky and interesting phase of Beck’s career: how best to resolve the realities of his life with the flippancy of his best art?