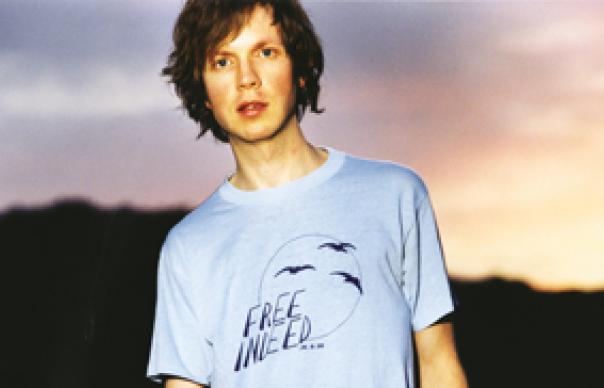 In the summer of 1994 following the death of Kurt Cobain, an enterprising exec might have put together a compilation LP celebrating the rise and fall of post-grunge alternative rock. All the 120 Minutes one-hit whiners could be there: Temple of the Dog, L7, Gin Blossoms, Soul Asylum, 4 Non-Blondes, Blind Melon, maybe that limey band that did “Creep”, and to top it all off with just the right twist of Gen-X irony, “Loser” by Beck. Ker-ching!, as they said back then.

At the time it was easy to see “Loser” as a delta-blues breakbeat update of Rod McKuen’s 1959 Beatsploitaton number “The Beat Generation” (“some people say I’m lazy, and my life’s a wreck / but that stuff don’t phase me, I get unemployment cheques”). But who could have predicted this boho bozo would wind up creating one of the definitive albums of the decade?

A 90s cultural landmark, now newly remastered and extended with b-sides, doodles and novelty goof-offs, Odelay could have easily turned out a very different record. A dismal experience on the 95 Lollapollooza tour and, in particular, the deaths of friends and family (including his grandfather and cut-and-paste inspiration, Al Hansen), had all sent Beck into a deep funk. Initial recordings in 1995 with Bong Load producers Tom Rothrock and Rob Schnapf had tended to sweetly despondent Neil Young-style laments.

Maybe it was his horror of cliché, the sheer predictability of making a record – let’s call it The Bends – about the sudden rush to celebrity and showbiz torpor, that made him think twice, but only “Ramshackle” would survive from these sessions to the final record (two more, the stunning elegy “Brother” and “Feather In Your Cap” now appear on the additional disc). Instead Beck hooked up with the Dust Brothers – Mike Simpson and John King, visionary architects of The Beastie Boys’ magnificent flop Paul’s Boutique – and set about making Odelay.

From its title on down (a studio corruption of “Orale”, the chicano equivalent of “Hell yeah!”) the trio conspired to make a defiantly, dementedly affirmative party record, something to send the Lollapaloozers wild. If the debut Mellow Gold had been, in Beck’s words, “a satanic K-Tel record found in a dumpster”, then Odelay was some acid-fried Folkways sampler, a set of American field recordings, as sampled by stoned enthnomusicollagists with a sick sense of humour. Harry Smith would surely have applauded.

Beck liked to claim that sessions had been recorded in a studio between The Muppets and Black Sabbath – and the America the album dreams up is bordered by idiot glee and dread. “Devil’s Haircut” kicks it off, powered by a souped-up fuzz-riff thieved from Them’s “I Can Only Give You Everything”, with some arcane old bluesman “coming to town with the briefcase blues”. A devil’s haircut, you could interpret as a sweetly succinct symbol for post-Cobain pop, the world of grunge couture, where rage and despair have become just another fashion accessory. You could see the following record, then, as a desparate escape from that rotting oasis, a Huck Finnish lighting out for the territories, a roadtrip on a Novacane Express, down the Alamo lanes, through the flypaper towns, to find out where, if anywhere, it’s really at.

“Hotwax” is what you might hear on your jalopy’s shortwave on the way, a roadrunner soundtrack as you drive by “karaoke weekends at the suicide shack”, the “Western Unions of the country westerns” and, best of all, the “Silver foxes, looking for romance, in their chainsmoke Kansas flashdance ass-pants” (Beck’s freakfolk freestyle yields some solid gold nuggets amongst the jive). The chicano chorus translates as “I’m a broken record with bubblegum in my brain” – a neat enough summation of Odelay’s modus operandi.

But the gonzo gusto is haunted by the ghost of the record Beck almost made, and some of the sweetest cuts track the lonesome wanderings of this post modern boho: the rippled weariness of “Jack-Ass”, the Tom Waits gamelan of “Derelict”, and the closing “Ramshackle”.
Of course nothing seems quite so out-of-date as the fashions of about 12 years ago, not yet ripe for nostalgia, but not fresh in the memory. Listening to some of the bonus tracks compiled on the extra disc – specifically the Aphex offcut “Richard’s Haircut” or the 12-minute blunted-beat remix courtesy of trip-hop conceptualists UNKLE – not everything has aged so well. And maybe it’s taken a decade and for Gomez to slide away, to hear just what a remarkable record Odelay really was.

But I wonder if what really makes Odelay sound so strange (and strong) today isn’t its optimism, “Where It’s At’”s faith in the “destination, a little up the road past the destinations and the towns we know” – a vision of some stoned soul picnic where the record’s myriad ingredients bubble up and mingle freely. Which is to say that Odelay now sounds like a time capsule telegram from the high noon of Clintonian possibility – when, for a moment or two, the mythic promise of America didn’t seem like such a busted flush. By the end of the year, we’ll find out whether that spirit is gone for good.