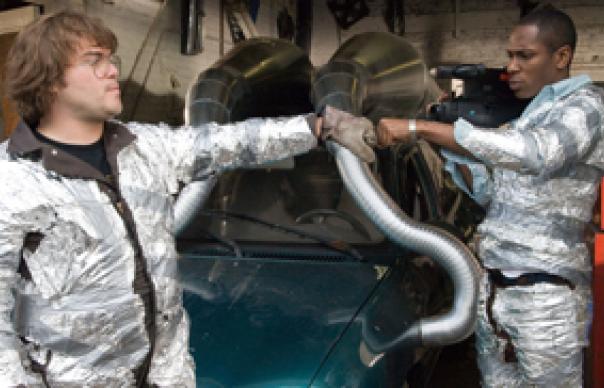 Michel Gondry‘s last film, The Science Of Sleep, was a beautiful, beguiling comedy about the limitless powers of the imagination, a subject Be Kind Rewind also tries to cover but with conspicuously less impressive results. Mos Def plays a small town video rental clerk; Jack Black is his (surprise, surprise) unhinged buddy who lives and works in a junkyard, a stone’s throw from the local power station. When Black accidentally erases the store’s entire inventory, the two decide to re-create their favourite movies, which prove a surprise hit with the town locals, who’re soon queuing up en masse to rent them.

This central 20 minute sequence, as Def and Black film their own cut-price versions of Ghostbusters, The Lion King, Driving Miss Daisy, RoboCop and Back To The Future in Black’s junkyard, goes some way to capturing the bizarro antics of Gondry’s previous work. In comparison, the rest of the film, where the store’s owner Danny Glover fights to save it from demolition at the hands of rapacious property developers, feels disappointingly conventional. As a geeky celebration of the power of no-budget inventiveness, Be Kind Rewind is at least a lot of fun, even if it does end up far too soft for its own good.