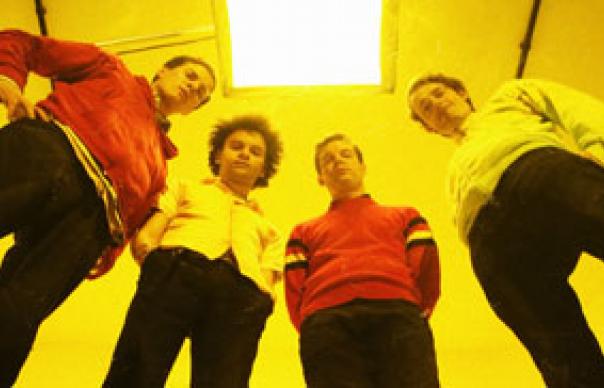 What links a former staffer of American satirical webzine The Onion, the drummer of metal bruisers Helmet, and a couple of refugees from obscure “math rock” bands of the late ’90s? Right now, it’s “Atlas” – a spinning glitterball of bouncy rhythms and firefly guitars inspired by the glammy Schaffel beat popular in the techno clubs of Cologne, but still addictive enough to score an NME Track Of The Week.
“Atlas” suggests that if, in recent years, avant-garde has become code for bloodless experimentation, New York’s Battles might just be the band to change that.

Formed in 2003 around guitarist/keyboardist Ian Williams, Battles are the product of intense studio alchemy. “Writing songs is like putting together a large puzzle,” laughs guitarist Dave Konopka, as Battles speed along en route to a show in upstate New York. “We hang up all these charts in our rehearsal room, and give the song parts weird names – it’s like, ‘Anjelica Huston’ totally doesn’t fit with ‘Brer Rabbit’! But sometimes it’s all about square pegs in round holes.”

Taking to the stage with guitars strung across their back like broadswords, Battles scramble between fretboard, laptop, and keyboard, Tyondai Braxton (son of radical jazzer Anthony) adding processed vocals or beatbox and drummer John Stanier nailing hard-hitting, complex rhythms. That Battles make magical fusions, not a confused mess, is down to the band’s democratic take on their diverse influences.
“Ian really likes African music, John is really into
hip hop, Ty likes orchestrated classical music,” says Konopka. And prog? “Yeah. I was totally into Yes’ Fragile. But not so much ‘Owner Of A Lonely Heart’.”

One final question: John’s cymbal is positioned a good seven feet above the stage – why? Dave relays the question to the front seat and the van dissolves into laughter. “He says…” relates the guitarist “…that he can’t get the stand down.”
That’s Battles: taking things just seriously enough.