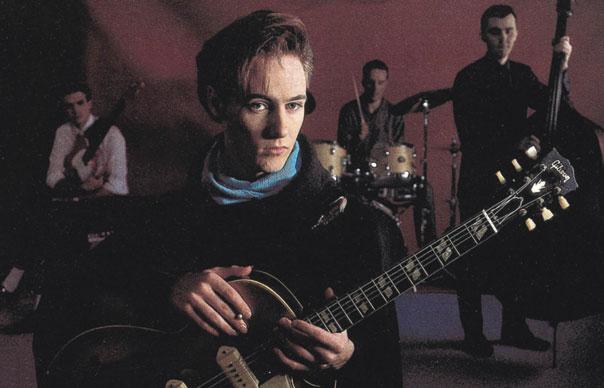 When Roddy Frame emerged, aged 16, on Glasgow’s Postcard Records, his band was compared by label Svengali Alan Horne to the Velvet Underground. Fanciful, maybe, but Aztec Camera’s debut 45 announced a songwriter of some precocity.

That said, it’s a shame the poetic rush of the Postcard period was effectively abandoned after the first album, High Land, Hard Rain (9/10) (1983), which remains a career highlight. The youthful zest in “The Boy Wonders” and “Down The Dip” can’t be faked, and if the decision to bring in Mark Knopfler to produce the follow-up, Knife (6/10) (1984) added polish, it also removed the vim from a decent set of songs. In truth Knopfler’s production has aged reasonably well, but the cover of Van Halen’s “Jump” (a B-side extra) shows how Frame’s perverse streak could have been managed more creatively.

Love (1987) (7/10) gave Frame got his first Top 10 hit (“Somewhere in My Heart”), and contains one of his best songs (“How Men Are”) but, small irony, his most popular set is also the most manicured. The live version of “Killermont Street” (an escapist hymn to Glasgow’s bus station) points ahead to Frame’s reinvention as a solo artist, but there was a creative rebirth with Stray (8/10) (1990), the most inventive and durable Aztec Camera LP. Diverse, yes, but it’s exhilarating to hear Frame switching-up from plaintive balladry (“Then Over My Head”) to the BAD-influenced “Good Morning Britain”.

WEA had given up by the time of the Langer-Winstanley produced Frestonia (7/10) (1995), though it bears re-examination. Yet the pick of these fine Edsel reissues is Dreamland (1993) (8/10), a sweet, soulful album, produced by Ryuichi Sakamoto, and supplemented by a great live set from Ronnie Scott’s. Frame revisits the second Postcard 45, “Mattress Of Wire”, covers Fred Neil’s “Dolphins”, and extracts every ounce of emotion from an extended “Stray”.

On reflection, nothing like the Velvets. Frame is an original; a Bowie fan, familiar with Dylan, happy to sound like a punk Julie London.
Alastair McKay