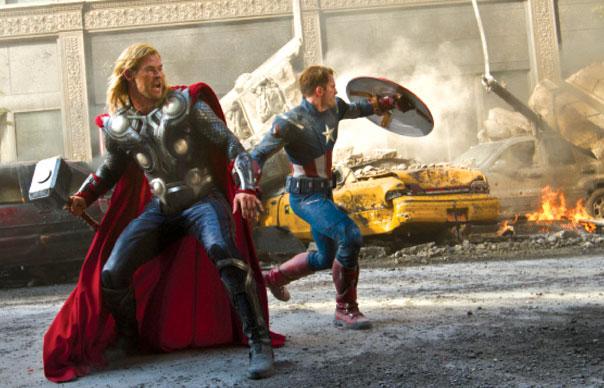 Avengers Assemble represents a gearshift for Marvel Comics’ Marvel Studios division; “the initiation of Phase Two protocols”, as Robert Downey egomaniacal billionaire industrialist Tony Stark might say. It shepherds into one mega-franchise a number of Marvel’s successful current properties – Iron Man, Captain America, Thor – and reboots another, The Hulk, for a third time. This is part of the Marvel Cinematic Universe – an ambitious strategy to crossover plots, cast and concepts that finds actors signed up not just for one sequel, but in certain cases optioned for nine films.

This kind of forward thinking is to be admired, but such is the nature of superhero movies that there is very little that is unpredictable here. It features six superdudes, some of whom are initially in conflict with one another before uniting to fight a common foe. An American city is imperiled. That it stars Downey Jr, Mark Ruffalo, Jeremy Renner, Samuel L Jackson and Tom Hiddleston ensures the acting is of quality. As Buffy creator Joss Whedon directs it, it has a savvy, pop culture wit about it. As it cost $220 million, the effects are satisfactorily high end. It’s in 3D, but that’s no longer really a selling point any longer.. The only surprise – and sorry for spoiling it for you – is an unexpected but entirely welcome cameo from Harry Dean Stanton, a warm, analogue presence in a robustly digital-age product.

Discerning followers of the Marvel movies may quibble with the programmatic nature of Avengers Assemble. (Certainly, there’s none of the blithe, whimsical qualities that made the best Marvel films fly: it seems extraordinary now to think that Marvel took such a high-risk gamble signing up Robert Downey Jnr for Iron Man, at a time when Downey’s stock was at the very least uncertain). Whedon directs with professional skill. It would be daft to truffle around for depth, motivation or emotional resonance here, but there is some attempt – particularly by Mark Ruffalo, as the Hulk’s human counterpart, Bruce Banner – to push a little deeper into his character. Ruffalo brings a quiet, melancholic dignity to Banner while his colleagues work their way through the full repertoire of superhero cliché; in many ways, he is the most intriguing player here, a more reflective presence alongside Downey Jnr’s deadpan cynicism. Scarlett Johansson and Jeremy Renner – as super-assassins the Black Widow and Hawkeye – seem to come from have interesting, morally questionable backstories, which the film doesn’t feel obliged to address. Certainly not when there’s some witty banter to be had, or a “Hulk smash!” sequence.

Indeed, as one watches Manhattan decimated in a final, exhausting battle between the Avengers and an army of alien baddies led by Hiddleston’s Loki, you might wonder how the insurance companies in Marvel’s Cinematic Universe pay out against claims relating to ‘damage caused by exploding giant alien slug.’
MICHAEL BONNER