From post-punk psych to ‘fairground hair metal’, via a lot of ’80s pop – this LA freak’s full-band debut is wild and free... 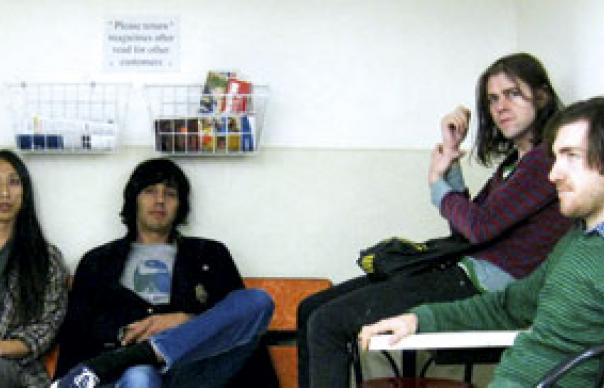 Genuine indie eccentrics are thin on the ground these days. The class of 2010 all seem so well-adjusted or self-conscious that it’s hard to know where we’re going to find a Mark E Smith or Will Oldham, petulantly pursuing a cryptic muse with total disregard for the expectations of their own followers.

But it finally looks like we’ve got ourselves a new contender. Ariel Pink is already a lo-fi legend: a prolific crafter of damaged pop songs delivered in a perplexing array of styles and accents, with the underfed appearance of a teenage runaway and the sincere belief that he’s “halfway between male and female”.

Since the late ’90s, while living in an apartment next door to his parents’ house in Pico-Robertson, LA, Pink has spewed over 500 songs into an 8-track using little more than a cheap keyboard, a bass and a three-stringed guitar. Three albums’ worth of his home-recorded material have appeared on Animal Collective’s Paw Tracks label, though much more exists on CD-Rs that Pink used to routinely press into the palms of strangers.

Before Today is the first album from Ariel Pink’s Haunted Graffiti the band, a crew of LA freak-sceners who’ve rallied behind Pink’s singular vision. Impressively, it achieves the feat of enhancing Pink’s legend without puncturing his mystique.

The ghostly pop sound of Pink’s previous output has proved curiously influential on the current generation of bedroom producers such as Ducktails and Toro Y Moi who’ve been corralled under the semi-sarcastic banner of chillwave. But whereas as most chillwave employs ’80s cues to evoke fuzzy nostalgia, Pink’s relationship with the pop music of his childhood seems altogether more complex.

“Round And Round”, with its fidelity to the sound of drivetime radio circa ’83 – think Hall & Oates, Rick Springfield, Naked Eyes – goes far beyond nod-wink irony; as “Can’t Hear My Eyes” fades out, you expect a husky DJ to lean into the mic and dedicate it “to all you night owls out there”. At the same time there’s something distinctly queer about the production, an audio equivalent of Vaseline on the lens that lends these songs a time-and-space-warping effect, making them actually sound as if they’re playing from the cassette deck of a Mitsubishi Starion.

Before Today isn’t strictly just an ’80s trip, though. “Bright Lit Blue Skies” is a terrific psych-pop nugget, a cover of a song by the relatively obscure New England garage band Rockin’ Ramrods, showing off the extent of Pink’s vinyl collection. “L’estat (acc. To The Widow’s Maid” mines the same vein of obscure arcane post-punk psychedelia that MGMT mainlined for “Congratulations”. “Butt-House Blondies” staggers between proto hair metal and a kind of fairground psychobilly, with Pink slipping – apparently unconsciously – into an English accent that only becomes sillier throughout the barely-hinged Bowie tribute/impersonation “Little Wig”. The band understandably appear to be having a blast, and the simian whoops at the end of “Beverly Kills” seem like an entirely appropriate response to the previous three minutes of delicious, sunbaked white funk.

But then there are the downer jams. The “Public Image”-esque “Revolution’s A Lie” sounds like the curdled ranting of a man who’s been sold a false dream one too many times, while “Menopause Man” – a prime example of Pink’s disorientating Hollywood gothic vibe, in which the brittle, Cure-like guitars of the verse establish a strange frisson with the Mirage-era Fleetwood Mac harmonies on the chorus – is a rather extreme resolution to see things from a female point of view: “Castrate me, make me gay/ Lady, I’m a lady from today” he sings, quite sweetly as it happens, which only makes it more unsettling.

Of course, it’s also the stuff of which cult dreams are made. Ariel Pink is probably the best weirdo pop savant to emerge from the American underground since Beck. Let’s hope the Scientologists don’t get to him.
Sam Richards