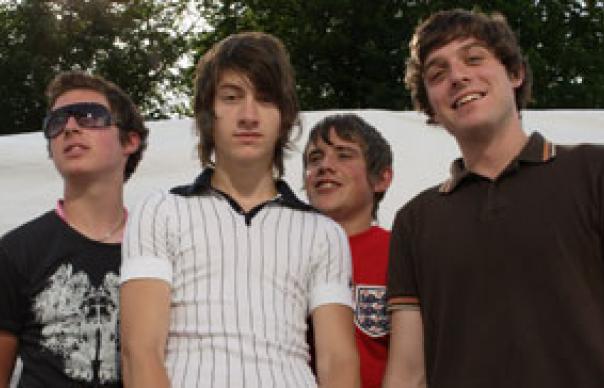 Once upon a time, a band from the North came with a sound so fresh and
vigorous it took the nation by storm. The sound was rock but crucially it was pop too: concise, punchy, melodic, shiny without being “plastic”. The singer was a true original, delivering a mixture of sensitivity and strength, defiance and tenderness, via a regionally-inflected voice. The young man’s lips spilled forth words that were realistic without being dour, full of sly humour and beautifully observed detail. Most recognized their debut album as a landmark, an instant classic.

And then came the doubt: how can they possibly follow it?
I’m talking about the Smiths, of course. But the narrative totally fits a
more recent group from the other side of the Pennines. Okay, it was Radio
One sessions rather than Myspace that built the Moz buzz, but otherwise the parallels are striking, right down to the non-album singles, and brilliant B-sides.

The similarities extend to initial encounters with “Favourite Worst Nightmare”, which gave me an eerie flashback to the disappointment of first hearing “Meat Is Murder”. Nightmare ‘s sound is brimming with vim, but hardly any of the tunes seemed to hit the bulls-eye. As for the words, they felt like “Rusholme Ruffians” and “Nowhere Fast” all over again – that same impression of a writer who was now coming up empty.

A couple more plays put paid to any worries on the songfulness front: these tunes will dog your every waking hour. Stronger still is the sheer force of the playing. Even with the loss of their original bassist, Arctic Monkeys still possess the most dynamic and supple UK rhythm section since the Stone Roses – the band’s power and agility at times resembles an Oasis fixated on Led Zeppelin rather the Beatles. Sometimes you even get the sense that these multi-segmented songs, full of stop-and-starts, are actually designed to show off their musicianship. They are also showcases for Alex Turner’s voice, an instrument as potent as the guitar, bass and drums.

What comes across even clearer on “Nightmare” than the debut is the sheer groove power of this band–the lithe swagger of “Teddy Picker”, the swinging hi-hats and low-rider bass of “D Is For Dangerous”– which goes back to the funk outfit Judan Suki that Turner and drummer Matt Helders operated in parallel with the fledgling Arctics.
“Favourite Worst Nightmare” is a near-triumph, a far superior Album #2 than “Meat Is Murder”, “The Libertines”, or “Second Coming”. Yet some doubts nag, partly because of the subject matter. There’s a slight suspicion that a fair few of the tunes are inspired by the travails of instant megafame. Take opener “Brianstorm”: over riffs that whir like the rotating blades of an abbatoir, Turner fires off glib (if funny) lines taking the piss out of some cooler-than-thou rockstar type they’ve evidently rubbed shoulders with these last 18 months–“We can’t take our eyes/off your T-shirts and ties/ combination”, climaxing with the terrific kiss-off “see you later, innovator”. Next up is “Teddy Picker”, mining a similar bluesy feel to “Fake Tales of San Francisco” and a similar tone of derision, except this time round the butt seems to be rock journalists: “D’ya reckon they mek ’em tek an oath that says ‘We are defenders/of any poseurs or professional pretenders around’?”

On the album’s second half “If You Were There, Beware” provokes a similar slight ennui: it lambasts “ambitiously vicious” muck-raking hacks grubbing for a kiss-and-tell story and harassing the star’s old sweethearts (“can’t you sense she was never meant to fill column inches?”). But here interest is sustained by the inventive song-structure. The Smiths are present again in “Fluorescent Adolescent”, which tells of that “very common crisis,” the spice going out of your sex life (“the Bloody Mary’s lacking the Tabasco”, as Turner puts it). In this case, it causes the frustrated girl to pine for some hit-and-run lover from her past (“the boy’s a slag – the best you ever had”). And then here they are again, on the next song “Only One Who Knows”, whose luminous guitar-tone recalls “Back to the Old House”.

The best things on “Nightmare” are the most lyrically direct. Like “Do Me A Favour,” a break-up song set–as with the first album’s best tune, “Red
Light.”–in a car, Turner’s eye for vivid detail in full effect. “This House Is A Circus” switches from the thrilling assonance of “this house is a circus/berserk as fuck” to the yearning chorus: “we’re forever unfulfilled/and can’t think why”.

Finally. the home stretch sees “Nightmare” open up with the emotional clarity of “The Bad Thing”, “Old Yellow Bricks” and “505”. The first is a song about infidelity, with Turner as the sorely tempted lad struggling to resist offers from a girl who assures him her boyfriend’s “not the jealous type”. “Old Yellow Bricks” depicts a slacker type who’s wasting his life. It’s a scathing yet sympathetic portrait, especially at the chorus: “he wants to sleep in a city that never wakes up/blinded by nostalgia”. “505” is about Turner’s own homesickness, an internal summons to hearth and sweetheart that must be heeded whether “it’s a seven hour flight or a 45 minute drive” away.

Expertly executed and supremely assured, “Favourite Worst Nightmare” isn’t going to make Arctic Monkeys any smaller in the scheme of things. They remain the best ensemble of guitar-toting tunesmiths to emerge from the UK this decade. While I’d be surprised if anyone, five years on, cared about this record as much as the first one, I await their “Queen Is Dead” keenly.