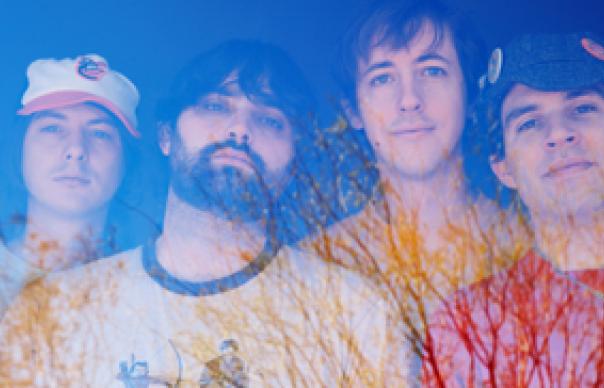 Animal Collective‘s new album is named after the Frank Gehry-designed ampitheatre in Maryland where as highschool kids they saw the bands – notably the Grateful Dead – that first blew their minds. Choosing such a title (which they now share with a Jerry Garcia Band live album), might suggest that the AC are simply acknowledging that, for all their outsider art beginnings and freaky enthusiasms, their burgeoning cult now places them, after the Dead and Pavement, quite squarely in the grand tradition of American jam-bands.

“In The Flowers”, the first track on Merriweather Post Pavilion, could even be a memory of some distant “Dark Star” freak out. It starts out, with the psychfolk shimmer and swirl of last album but one Feels, as a kind of fried reverie, envying the rapturous abandon of a girl dancing in a field, “high on her own movement”. But then, as Avey Tare wistfully sings “If I could just leave my body for a night…” the track erupts into an astonishing, galloping Phillip Glass flamenco-techno reel. Eventually, when the boom of the bass and the drums subsides, the track comes back down with the early hours walk home as “the ecstasy turns to rising light…”

Understandably in light of such lines, people are already talking up MPP as the AC’s E album – the moment when the wild-eyed animists of alt.folk start raving. But with the group’s long-standing ritualistic interests, you could just as easily interpet their ecstasy in the etymological, ancient Greek sense of frenzied transcendence, of “standing outside oneself”.

Whether this bliss is chemical or shamanic, what’s clear is that Animal Collective have truly surpassed themselves. MPP isn’t just an advance on Sung Tongs and Feels – it feels like that moment in Star Wars when the Millennium Falcon jumps into hyperspace and all the stars go wild.

Though they’ve been filed as part of the freak-folk fold, the band have long maintained they’ve more in common with electronic acts – the sumptuous minimalism of Luomo or the pop-ambient of the Kompakt label. And on earlier records, and particularly Panda Bear’s sublime Person Pitch, you could sort of imagine them as a kind of bizarre Amish techno act – emulating digital dance music without electricity, but with acoustic guitars, vocal harmonies and tape loops. On MPP they now sound electrified: AC fully plugged into the DC, anchoring their fluttering reverbed chants with seismic beats and bass.

Second track, “The Girls”, is the perfect demonstration of their new resources. Rippling waves of synths are pounded by Aaron Copland bass drums as Panda Bear/Noah Lennox multitracks his voice into a call and response choir. In what almost seems like an apology for the song’s irresistable pop momentum, he sings about how he doesn’t care for material things and just wants four walls for wife and daughter.You suspect the song could quite easily become a huge crossover hit on the scale of say, “Born Slippy” ten years ago – in which case the girls won’t have to worry too much about holes in the roof.

The wonders keep coming. “Summertime Clothes” is a delirious number about walking the streets on nights when it’s too hot to sleep, with Avey singing “I want to walk around with you!”, in a way reminiscent of the plain, profound joy of Arthur Russell’s “Let’s Go Swimming”. Indeed at times, MPP feels like the AC have managed to shake all of the fugitive fragments of Russell’s remarkable career – from fragile folkpop to disco trance and buddhist bubblegum – into a brilliant kaleidoscopic design of their own.

The infatuated “Bluish” meanwhile manages to synthesise the dazzled awe of Mercury Rev circa “Carwash Hair”, the lucid languor of Primal Scream’s “Higher Than The Sun” and the sun-spangled melody of Brian Wilson. And yet listing references almost seems beside the point; there’s no sense of pastiche, everything feels utterly, unmistakeably absorbed into the Animal Collective universe.

There’s not a weak or wasted track here, but the final two are magnificent: “No More Runnin”, a more down-tempo, dreamy number, comes on like a tropicalized Beach Boys, transposing their harmonies from the California coast to a lazy river meandering through some Rousseau-esque rainforest. And the closing “Brother Sport” is sensational, exploding like a psychedelic carnival parade, culminating in a polyphonic spree of endless chattering loops.

It’s hard to overstate Animal Collective’s achievement on this record. They’ve made a dance record, out of evident love of the latest digital developments , but it’s a dance record with an odd, distant hint of Sousa marching bands. They’ve made a blissed-out rave record, but one with touches of Terry Riley’s all-night minimalist trances. It’s a rare contemporary album that sounds like it couldn’t have been made at any other time or by any other band.

Maybe the overwhelming, full-throated joy of it all sounds particularly radiant in the fluey gloom of winter, but right now Merriweather Post Pavilion doesn’t just seem like one of the first great records of 2009, it feels like one of the landmark American albums of the century so far.