Anatomy Of A Murder 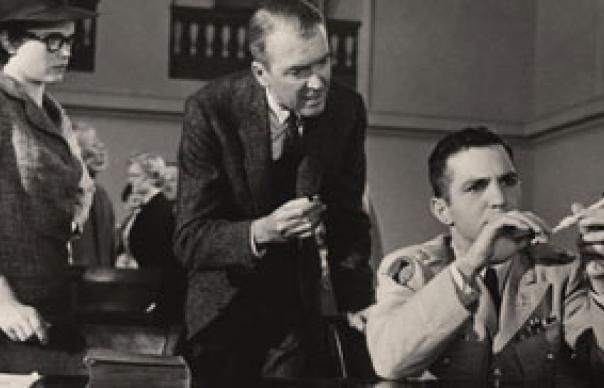 Otto Preminger was a wealth of contradictions and ambiguities. A dictatorial movie director, nicknamed “Otto The Terrible”, his films are still steeped in social equality. He was a Viennese Jew who moonlighted as a screen Nazi (see Stalag 17), made his classic ‘Hollywood’ films while working outside of the Hollywood system, and balanced his oft-declared antipathy towards actors and stars with his own celebrity status (he appeared as Mr Freeze in TV’s Batman, and was a regular on Johnny Carson’s Tonight Show). It’s no surprise then, that courtroom drama Anatomy Of A Murder from 1959, arguably Preminger’s finest film, is also his most brazenly ambiguous.

From the opening Saul Bass title sequence and Duke Ellington score, Preminger introduces a movie that’s simultaneously seedy and righteous. There’s defence attorney Paul Biegler (Stewart), who frequents late night jazz bars, has been passed over for promotion and isn’t averse to leering at slatternly soldier’s wife and rape victim, Laura Manion (Remick). Manion’s hothead husband Fred (Gazzara) has murdered Laura’s alleged rapist, and now Biegler has to prove that Fred was temporarily insane at the time. But Preminger, himself a law graduate, doesn’t stop there. Fred (the brilliantly mercurial Gazzara) is deeply sinister and possibly homicidal, while Remick’s Laura is sociopathically horny – she attempts to seduce Biegler at the crime scene, is forever “jiggling about” in tight outfits, and her torn ‘panties’ become the cornerstone of the case. Denying us a team to cheer, Preminger asks us to observe open-mouthed as the process of law is batted furiously back’n’forth between the resourceful Biegler and prosector George C Scott.

Preminger’s methods are ultimately so assured that by the movie’s end it barely matters who wins or loses, just that Biegler has another case. And he does.