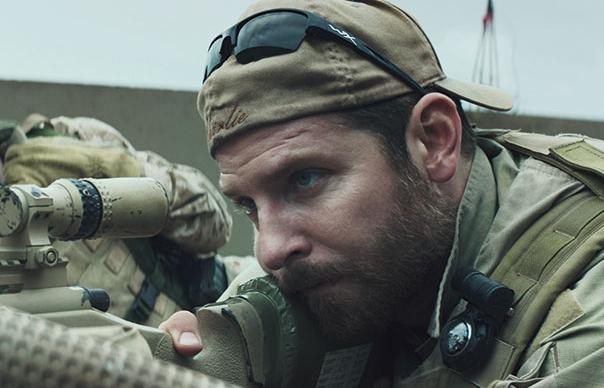 In 2013, The New Yorker ran a here about Chris Kyle, a decorated sniper in the US Army. The story detailed Kyle’s extraordinary war record, but also explored the debilitating post-traumatic stress disorder both he and other veterans experienced back home. The bulk of The New Yorker story takes up roughly the last ten minutes of Clint Eastwood’s new film, which is principally concerned with building Kyle up an All-American Hero: a patriot for whom the words “God, country, family” are all consuming. Kyle – played by a beefed up Bradley Cooper – is told from an early age that he has “a hell of a gift” with a gun. At the dinner table, the impressionable Kyle is told by his father that “there are three types of men in this world: sheep, wolves and sheepdogs.” To be a man, he must grow up to be a sheepdog. After watching the 1998 attacks on the US Embassy in Dar Es Salaam on television, Kyle enlists. Before he knows it, he is in Fallujah, racking up a body count.

Where to start? In the last week or so, American Sniper has become a phenomenon. First, there were unexpected Oscar nominations for Best Picture and Best Actor. This news was followed by its remarkable box office takings over the extended Martin Luther King holiday, where it took $89.5m US. As Gant’s assiduous stats-crunching illustrates, American Sniper has significantly struck a chord in Red-state America – in the way that, for instance, other films that have dealt with Iraq war never did (as Charles points out, The Hurt Locker only took $17m US in the States). Evidently, there is a substantial proportion of the American population who have responded to Eastwood’s morally absolutist depiction of war.

Essentially, American Sniper plays out like a two-hour report on Fox News. This is an excitable, macho depiction of war, with much manly banter yelled over gunfire. Kyle’s fellow Navy SEALS are pencil-thin sketches, but at least they fare better than the women in American Sniper who are presented either as timid, unfaithful or duplicitous. At best, they are grieving wives and mothers; at worst, they are devious insurgents who send their children out onto the streets with concealed grenades in order to kill American soldiers. The most significant female character in American Sniper is Kyle’s wife Taya, played by Sienna Miller, who is largely reduced to crying or simpering.

It is possible to admire the vigour and discipline with which Eastwood shoots the scenes of conflict – but all the same, this is simplistic, reductive movie making. The Iraqis are seen either through Kyle’s sniper-sight or, at close range, are revealed to be treacherous bad guys. The dialogue is clunky, predominantly expository: “Even when you’re here, you’re not here,” complains Taya. All of this has been done before – and much better – in The Hurt Locker.
Michael Bonner