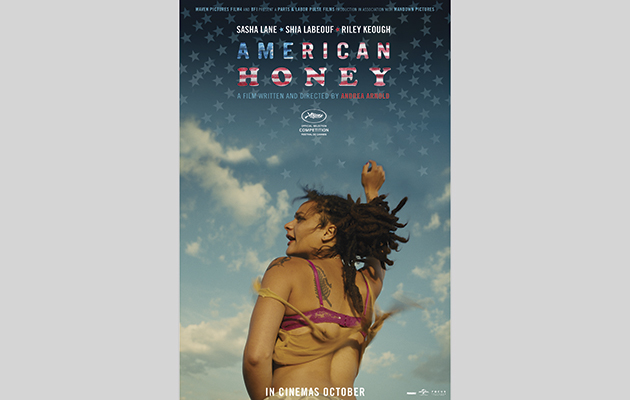 The breakthrough film for British director Andrea Arnold was Wasp, an Oscar-winning short about a single mother struggling with her four children in a dull dormitory suburb.

Arnold’s latest film, American Honey, follows another teenager whose life is at a dead end – Star (Saska Lane) – who anticipates freedom and excitement when she joins a crew of college-age kids travelling across America selling magazine subscriptions. “We do more than work,” Star is told. “We explore America, we party!”

Their foreman is the charismatic Jake (Shia LaBoeuf), and Star is immediately drawn to him. For the next three hours, Arnold follows her gang of hard partying hustlers as they freewheel their way round motels and car parks in the Midwest.

The film’s first hour is the most cohesive – at times, American Honey resembles social documentary, as the Dartford-born Arnold lets her camera linger on stray dogs pawing the ground outside a motel on the outskirts of Kansas City, or frames middle-aged, overweight couples line dancing in Oklahoma.

Despite a spirited performance from Lane as Star – whose outward defiance masks a deep-rooted vulnerability – there is little to anchor the film. Conflict between Star and Jake’s tough-as-nails white trash boss Krystal (Riley Keough; Elvis Presley’s granddaughter) is strung along. The cycle of travelling, selling and partying becomes repetitive It is best, perhaps, to enjoy the dynamic cinematography by Robbie Ryan, who brings colours to life with burning intensity; his night scenes, particularly, find Arnold’s feral brood whooping it up round ad hoc bonfires, wild things caught in silvery moonlit tones.