The Horse ride again to both mellow and bracing effect 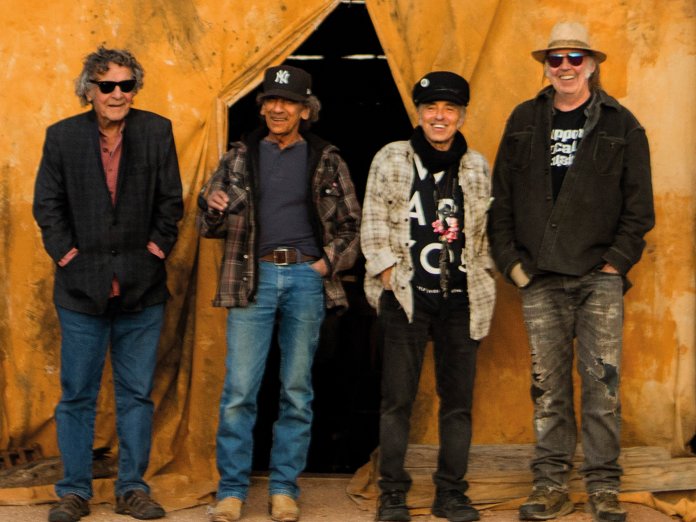 More than 50 years after “After The Gold Rush”, Neil Young still feels like getting high – Rocky Mountain high, that is. Barn, his latest album with Crazy Horse, was recorded way up in the Telluride, Colorado, area, 2,667 meters (8,750 feet) above sea level. Of course, the 10-song LP’s sessions took place in a restored 19th-century barn, pictured on Daryl Hannah’s evocative cover photo.

The Rockies and the latterday Crazy Horse (now consisting of stalwart rhythm section Ralph Molina and Billy Talbot, plus multi-instrumentalist Nils Lofgren) are a good fit: craggy, elemental, monolithic; imposing from a distance but teeming with life the closer you get. And both have been providing natural highs for quite some time.

Barn is Young and Crazy Horse’s follow-up to 2019’s Colorado, and it generally follows the same template; Neil long ago gave up trying to force the Horse out of its comfort zone. There are warm ballads and fierce electric workouts, winsome journeys through the past and angry visions of the future, mostly captured live with minimal overdubs. On the whole, however, Barn is a stronger effort than its predecessor, with this particular lineup finding its footing. Where some of Colorado’s jams failed to ignite, the interplay here crackles frequently and the energy levels remains high, even in the quieter moments. Lofgren, at 70, is the young man of the band, but this is a band with plenty more to give. “Yeah, I’m older now, but I’m still dreaming,” Young sings at one point. Crazy Horse have always been able to bring his dreams to vivid life.

Neil and the Horse welcome us into the Barn in laidback fashion with “Song Of The Seasons”, a loose acoustic ramble, Young’s wheezing harmonica blending nicely with Lofgren’s accordion, Talbot and Molina treading lightly behind them. It feels like (and may well be) a first take, as though Neil’s still writing the tune in his head, stumbling a bit over the phrasing and melody. That’s not a complaint; rather, it enhances the touching fragility of the performance, with lyrics that refer to a lingering past (“I see the palace where the queen still reigns”) and an uncertain present (“Masked people walkin’ everywhere”). When the chorus rolls around, the softly swelling backing harmonies are familial and intimate, friends lifting one another up with music, one more time.

Lest you think that Barn is going to be all in this mellow vein, a blast of bracing electricity comes next on the standout track “Heading West”. It opens with a majestically crunchy riff that could have been lifted off Zuma, Old Black cranked all the way up for a spiritual sequel to “Don’t Be Denied”. Like that 1973 cut, Neil’s mind wanders back to his youth in Canada, recollecting his mother, fishing at the mill, his first guitar – “the good old days”, as the song’s stirring refrain goes. Most revealing of all is the line about putting his ear down on the railroad track to “listen for the train to come back”. Here’s a man who has had a lifelong love affair with pure sound. His restless search goes on.

As with most of Neil’s 21st-century output, there are a handful of throwaways here. But they’re charming throwaways, all the same. The band leans merrily into the Jimmy Reed-isms of “Change Ain’t Never Gonna”, Young’s barrelhouse piano blending with Lofgren’s sly slide guitar work. Meanwhile, “Canerican” is built around a cringeworthy portmanteau, but it gets by on the fumes of its relentless stomp. “Shape Of You” (no, not that “Shape Of You”) conjures up the rambunctious spirit of the tequila-soaked Tonight’s The Night sessions (minus the gloom), with Neil slipping into a hilarious falsetto in between boisterous harmonica breaks. “Human Race” is the lyrical low point; it’s essentially the same climate change rant Young has been writing for more than a decade now. A fine, necessary sentiment, but more of an op-ed than a song. Then again, the tortured, almost atonal solo Neil tears out at the end almost redeems the whole enterprise.

Barn’s twin peaks are two magnificently oblique dirges, “They Might Be Lost” and “Welcome Back”. The former finds the Horse in a dusty, minor-key acoustic mode as Young broods impatiently, waiting for “the boys to come get the goods”. It’s a blurry snapshot – we’re never quite sure what exactly will happen when they arrive – but it’s captivating all the same, capturing the strange stasis we’ve all been experiencing during recent years. “Welcome Back”, the longest track on the album at eight-plus minutes, is a feast for Crazy Horse aficionados, landing somewhere between the impossibly bleak mood of “On The Beach” and the slow-burn drama of “Danger Bird”. As his band hangs steadily back, Young whispers gnomic riddles, punctuating them with several exquisitely expressive solos, some of them spectral and haunting, others filled with a barely contained rage. A hypnotic, disquieting performance, rising ominously like a full moon over snowcapped mountains.

Neil doesn’t leave us in limbo, however. The Barn doors close with “Don’t Forget Love”, a fragile but reassuring pop song, its wide-eyed lyrics and melody calling to mind the childlike wonder and wisdom of Brian Wilson or Daniel Johnston. We may be a long way away from the Horse’s early days, but the ride somehow, thankfully, continues.