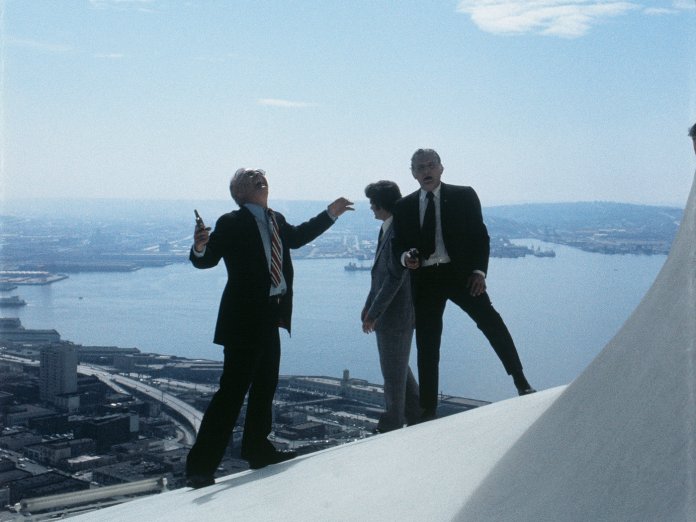 “If the picture works,” director Alan J Pakula said of 1974’s The Parallax View, “the audience will trust the person sitting next to them a little less at the end of the film.” The Parallax View is a key paranoia-conspiracy movie from a decade – the 1970s – that was full of them, from The Conversation to Three Days Of The Condor and Pakula’s next work, All The President’s Men. Adapted from a novel reflecting unease around the disappearance of many individuals connected to the JFK assassination, the film imagines a shady deep state organisation bumping off witnesses to a presidential murder. This release compiles every note of music from the original photoplay on vinyl for the first time.

Composer Michael Small had already soundtracked two previous Pakula movies, including the excellent Klute. He felt the latter had waded into too-dark waters, and his theme tune and cues – totalling just 24 minutes – speak to Parallax’s slow-burning, ominous disquiet. The main theme is a looming chord on deep strings with classic blips of piano and woodwind: menace and suspicion leach out of every bar. A lone violin slices diametrically athwart orchestral string-sweeps, an individual out of kilter with a larger entity. Written to accompany a tracking shot of corrupt judges dismissing a case, the cue was intended as a broody distortion of a patriotic anthem. The composer considered this appropriate in a film that was “exploring conspiracy as skewed, inverted loyalty.”

The most challenging sequence – the film’s notorious centrepiece – is Beatty’s induction at the Parallax organisation’s Division of Human Engineering (the chillingly calm voice of his unseen interlocutor is now revealed to be Pakula himself). In order to inculcate emotions of anger and injustice, prospective assassins are force-fed a montage of American iconography, from historical paintings to photos of Depression-era poverty, images of idealised family life and the unattainability of the American Dream. The music Small wrote to accompany the brainwashing is a nostalgic distillation of country rock and folk-pop, rising to a chest-swelling Sousa-style march, then whipping up passions with searing Farfisa-heavy acid rock. It’s a masterstroke that recognises the power of battle hymns to stoke nationalist fervour and inspire murderous vengeance.

Small’s soundtrack was praised at the time of the release – Pakula stated it was one of his favourite scores – and he went on to compose for unsettling thrillers such as The China Syndrome and Marathon Man. Meanwhile, with its pessimistic portrayal of subverted democracy, homegrown terrorism, and the engineered mistrust of government, The
Parallax View speaks more clearly than ever to a contemporary USA of 4chan nutjob recruitment, a besieged Capitol and weapons-toting members of Congress.