A sublime but slender conversation between avant-jazz and orchestral electronica 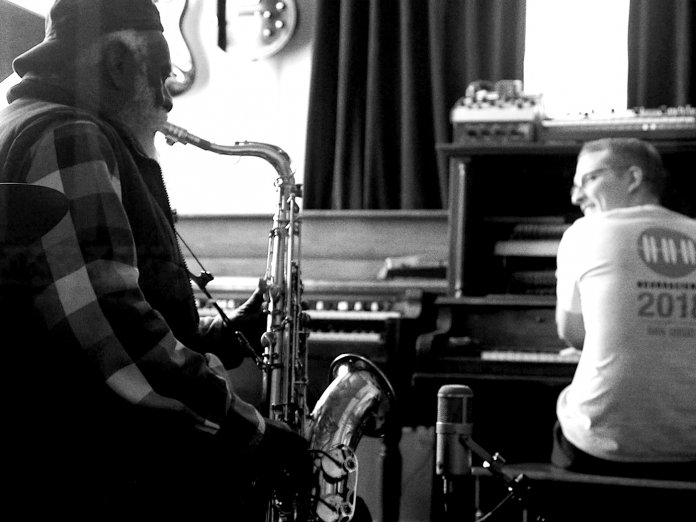 Even by his own over-achieving standards, Sam Shepherd has pulled off an impressive coup with his latest pan-generational opus. Over the past decade, the classically trained Mancunian polymath composer behind Floating Points has traversed the outer limits of jazz, electronica and orchestral post-rock, DJ-ed at achingly cool clubs and worked with numerous stellar talents. Meanwhile, lest we forget, he also completed a PhD in neuroscience. But Shepherd surpasses himself on Promises by scoring an increasingly rare collaboration with living legend and towering tenor sax innovator Pharoah Sanders, who turned 80 last year, with classy back-up from the string section of the London Symphony Orchestra.

Closer in form and mood to the expansive electro-orchestral reveries of his 2015 debut album, Elaenia, than to its more eclectic, club-friendly 2019 sequel, Crush, Shepherd’s latest release pays unashamed homage to the spiritually inclined “astral jazz” of the late 1960s and early 1970s. Of course, as a former collaborator with both John and Alice Coltrane, Sun Ra, Ornette Coleman and other immortals, Sanders himself was a pioneer in this field, moving from frenetic free jazz into more meditative, cosmic, ambient fusion territory. With its woozy lava-lamp tempo, Quaalude-fuzzy warmth and emphatically analogue feel, Promises could almost be some long-lost modal jazz classic from 1972. The only surprise is that Shepherd did not sprinkle the sound mix with authentically retro vinyl crackle.

Promises first began to take shape five years ago as an improvised jam session in LA featuring Sanders and Shepherd, which was commissioned by Luaka Bop, the globalised fusion-pop label founded by David Byrne. Shepherd later embroidered this sparse conversation between piano and saxophone into a rich tapestry of vintage acoustic and electronic instruments including harpsichord, Hammond B3 organ, EMS Synthi, ARP 2600, Buchla 200e and more. As with previous Floating Points albums, the studio gear list alone will be pure geek-porn for analogue-synth nerds.

Just last year, Shepherd completed this long-gestating project by convening the LSO strings for a socially distanced session in London. Though they never dominate the album’s sound, the string players give it extra ballast and bandwidth, couching the core modal melody in supple arrangements that alternate between delicate tonal retouching and drenching widescreen lyricism.

Despite being pretentiously packaged as a suite in nine movements, Promises is essentially a single long composition topped off with a short surprise coda. The gently hypnotic heartbeat running through the album is Shepherd’s spare keyboard motif, a recurring ripple of broken chords that steadily lap and ebb like becalmed waves on a sheltered beach. Over these amniotic undulations, Sanders initially lays hesitant vapour trails of saxophone, breathy and reedy, intimate and warm-blooded. “It was like the instrument was an extension of his being,” Shepherd recalls in the accompanying press notes, “a megaphone for his soul.”

But as the piece expands, with voluptuous LSO strings and lush electronica swamping the main melody, Sanders shifts into a more assertive gear, striking off on choppy free-jazz tangents, melismatic volleys and blues-inflected licks. As Shepherd’s keyboard noodling swells into cosmic lounge-jazz mode, Sanders also adds some half-submerged vocalese burbles, sleepy-voiced scats and falsetto ululations that sound more like spontaneous responses to the music than pre-planned interjections. These are very human touches, fleeting but charming. More of these playful interjections would have been very welcome.

Hitting its feverish peak around the 30-minute mark, Promises becomes a ravishing symphony of glissando synth sirens, melting portamento chords, hovering strings and twinkling birdsong effects. There are countless musical ghosts at this feast, from the mind-bending celestial visions of mid-period Miles and Alice Coltrane to the cumulative avant-minimalism of Gavin Bryars and William Basinski. Sanders finally gets to let rip here with some thrilling, energised, discordant honking before Shepherd dims the lights again for a slowly receding fade-out of low drones and deepening silence. A hidden coda lurks in the afterglow, rearing up from the shadows with a shiny effusion of strings. Far more modern classical than jazz in style, this brief encore is a bracing but oddly incongruous afterthought.

Promises rewards repeat listens with its immersive, densely layered, quietly mesmerising beauty. But it is also an unusually slender piece of work for Shepherd, especially when set against the kaleidoscope range and dynamism of Crush. Beneath its ornate instrumentation, this elegant exercise in retro pastiche never quite shirks the sense of being a single skeletal composition stretched a little too thinly across 40-plus minutes, a watercolour sketch dressed up as a grand canvas.

With fairly limited room for textural variation or harmonic progression, Sanders also feels underused in places, more guest player than equal collaborator. And while it would be unfair to expect a veteran jazz revolutionary to break new ground so deep into his autumn years, Shepherd’s tastefully manicured moodscapes would have benefited from a little more Pharoah input in general, even in his current mellow grandfatherly mode. Promises is an impressive collision of talents, and sublimely lovely in places, but also frustratingly slight. A minor addition to the canon of its two main authors, it earns the double-edged compliment of all half-great albums: it leaves you craving more.