Veteran sideman takes a rare turn at the mic 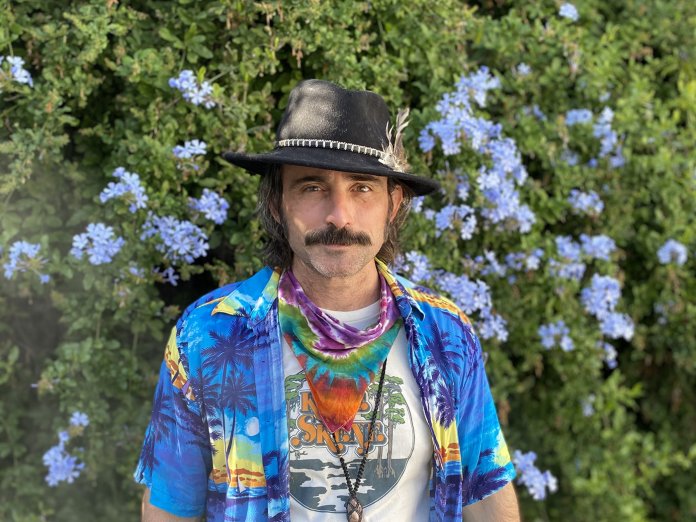 You could get a contact high off “Cave Walls”, the first proper song on the self-titled debut by Farmer Dave & The Wizards Of The West. It opens in a cloud of rumbling guitars, hallucinatory synths and drums mixed to sound thick and gummy. The band flirt with the beat, coming down on either side of it, creating a sense of subtle weightlessness, as though they’re all hovering an inch or two off the ground. “May I be your forever freak”, Farmer Dave sings, projecting a sleepy-stoned charisma as he rambles about kid-sister empresses and sneaks in an Easter-egg shout-out to Led Zeppelin. That’s not a guitar solo, but two players trying to untangle their strings before the song ends in a galaxy of distortion.

It’s a fitting introduction to this oddball group, whose buzzed vibe conceals some truly sharp chops and deep smarts. Farmer Dave Scher has spent most of his career on the side of the stage, his guitars (electric, lap steel, pedal steel) set up well out of the way of whoever he’s supporting. A member of All Night Radio and Beachwood Sparks – two turn-of-the-millennium LA bands that found new ways to play old California music – he revealed his frontman ambitions with his genial 2009 solo debut, Flash Forward To The Good Times, then spent the 2010s touring and recording with Jenny Lewis, Kurt Vile & The Violators, Cass McCombs and Chris Robinson, among others. At some point he even found the time to make good on his nickname by moving to a working farm outside Ojai and studying sacred plant medicine in the Amazon.

Both the Wizards Of The West and their self-titled debut grew out of a recent summer residency at Club Pacific in Venice Beach, where they worked up a solid set of songs before workshopping them on small stages up and down the Golden State. Fortunately, they never got the songs too perfect, and the record has the excitement and spontaneity of a live album, albeit without crowd noise or stage banter. The road-hardened quartet bounce off each other with a chummy jocularity, improvising their way towards some form of enlightenment. It’s a modest, affable, occasionally goofy affair, and therein lie its charms.

The music is, of course, steeped in California rock: the cosmic crunch of the Grateful Dead, the spacey twang of The International Submarine Band, the psychedelic spirituality of Ya Ho Wha 13. But their touchstones are so specific, so left-of-centre, that nothing sounds derivative; the Wizards play in present tense, never past. In fact, California – its landscape, its history, its culture and counterculture – becomes the overarching subject of the album. “Ocean Eyes” sounds like a bittersweet love song to the state, as Scher tenderly trips on the romance of the place and turns in some of his loosey-goosiest vocals. “My, how the canyon glo-o-o-ows”, he sings, supplying his own echo. “We’ll always have Big Sur, baby”, he declares and somehow that farewell sounds heartfelt rather than corny.

Instead of apeing their heroes, the Wizards build on those foundations and put their own spin on West Coast sounds. They experiment with space blues on “Mutant Pill” and campfire singalongs on “Stand & Deliver”. On “Bohannon” they eulogise the late Detroit dance auteur Hamilton Bohannon, best known for the 1976 club hit “Let’s Start The Dance”. He’s an unlikely hero, especially since he refused to follow Motown out to California, but the Wizards sound sincere when they chant “Bohannon forever” over a slow-motion disco beat and what sounds like a very long bong hit. It’s a showcase for drummer Jud Birza, whose subtly complex beats rein in the guitars and allow the band to move fleetly. He drives their closing cover of “Wipe Out”, the 1963 hit by The Surfaris. Birza pushes the song along at a gnarly pace, as though he’s trying to jostle the other band members off their boards. They add zombie vocals and toppling waves of organ, and change the key to make it sound like a modded-out version of the Twilight Zone theme, finally bringing it to an end with a noisy crash.

An unlikely climax to an unpredictable and ingenious album, “Wipe Out” might sound like an afterthought, but the band are obviously having a blast reimagining the familiar surf-rock tune, especially in such close proximity to disco, canyon folk and psych rock. They thrive on such far-flung musical juxtapositions and make their excitement contagious. As the forever freak sings on “Stand & Deliver”, “All the Earth is a-where I run”.