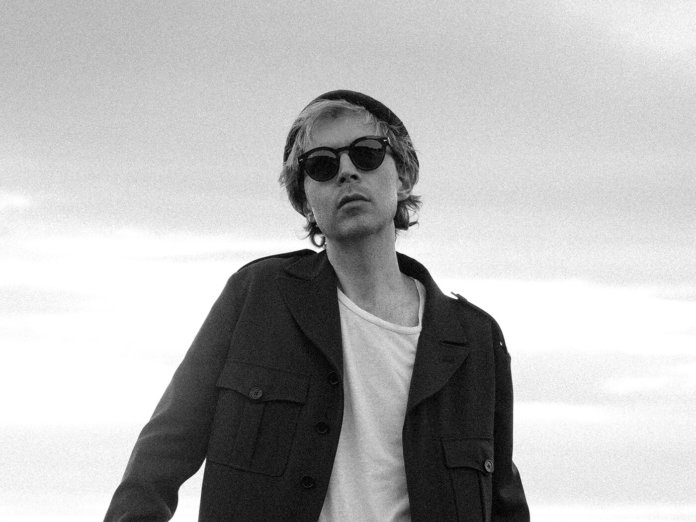 Hyperspace is the 13th studio album by a man soon to enter his fourth decade as a recording artist and his sixth as a human being on this planet. Given those formidable numbers, Beck may understandably be a little weary of the business of being Beck. Perhaps that’s why he assigned some of the burden to Tessa Thompson in the video for “Uneventful Days”, which features the Thor and Westworld actress on the streets of LA sporting the same ensemble of leather jacket, cowboy hat and boombox that added up to Beck’s iconic look in “Devil’s Haircut” nearly a quarter-century ago.

While the genuine article does appear elsewhere in the Dev Hynes-directed clip singing plaintively in dark sunglasses, having a celebrity friend play an earlier self seems entirely on-brand for the artist who introduced the pleasures of postmodern pastiche to the largely earnest era of grunge and has since spent his career trading in one identity for the next. After hopscotching from anti-folkie to slacker MC to Prince wannabe to voyager into the slipstreams of psychedelia and Tropicália and back again, surely there comes a time to take yourself out of the picture entirely.

Yet as so often has been the case, any overt display of ironic detachment is more likely a red herring, a means of obscuring the more discomfiting feelings of pain and confusion that fill so much of Beck’s songwriting. For all of its shimmer and shine as a piece of high-gloss contemporary pop, “Uneventful Days” depicts an experience of abandonment and isolation, of “living in that dark, waiting for the light”. Amid the lamentation there are also some words for anyone who believes they know Beck’s next move: “You may know my name/You don’t know my mind”. And just as he does on all of his best albums, Beck finds fresh ways throughout Hyperspace to confound the question of who exactly he ought to be, all while making music that feels instantly familiar and sneakily unpredictable.

If there’s a new identity that takes precedence here, it’s the sad-eyed electro-soul softie. That too may surprise anyone who expected Beck’s teaming with Pharrell Williams for seven of Hyperspace’s 11 tracks – a collaboration that he’s pursued for over a decade – to yield an equally exuberant successor to 2017’s Colors. Of course, there are traces of the melodic and rhythmic sensibility of Williams’ hits for the likes of Britney Spears, Daft Punk and Rihanna, plus the big-hatted one’s still-ubiquitous “Happy”. Hyperspace’s most aggressive and Odelay-like track, “Saw Lightning”, combines some hectic slide-guitar and harmonica playing with the clipped, flat drum sound that’s been a trademark of Williams’ productions with Neptunes partner Chad Hugo since early masterstrokes like Mystikal’s “Shake Ya Ass”.

Yet the biggest influence Williams may have had is to curb his client’s maximalist tendencies and encourage greater clarity of purpose and feeling. So for all the unabashedly synthetic trappings of the title track and “Dark Places”, the songs boast a quality of open-hearted sincerity, something that had been previously more prevalent in straighter, more strictly singer-songwriter-oriented outings than the more experimental (and usually more interesting) regions of his back catalogue, which is where Hyperspace happily belongs.

The spacious feel of Williams coproductions such as the gauzy “Chemical” extends to Beck’s tracks with other collaborators, too. Co-produced by Cole MGN, “Die Waiting” is an effervescent statement of romantic devotion that rides a spidery guitar line and a rubbery rhythm. Made with producer Paul Epworth, “Star” is a spectral, spiky R&B track full of eerie burbles and squelches. On “Stratosphere”, the voices of Beck and guest Chris Martin float on clouds of washed-out keys and softly strummed guitar.

Matters are more anxious on “See Through” as Beck and longtime keyboardist and co-producer Greg Kurstin put their spin on Drake’s emo hip-hop while retaining the requisite expressions of hurt and confusion – “I feel so ugly when you see through me”, Beck murmurs. While any such references to emotional turmoil are suggestive of the recent end of Beck’s 14-year marriage to Marissa Ribisi, the new album is far more varied in tone and tenor than Sea Change, one of the 21st century’s more desolate break-up albums, or the similarly melancholy Morning Phase.

Maybe it’s because of all those airy, pillowy synth sounds – or the heavenly choir on “Everlasting Nothing”, the album’s gloriously if incongruously U2-scaled space-gospel closer – but there’s a warmth and lightness here that counters Hyperspace’s bleaker edge. It also ameliorates the sense of cool reserve that can sometimes make Beck seem less present in his own music than he ought to be. As layered and textured as songs like “Chemical” and “Stratosphere” may be, Hyperspace never feels over-calculated or over-dressed. Instead, it’s the work of an artist who sounds fully re-engaged. As such, it’s a useful reminder of how new partnerships can bring out one’s best self; no small thing for someone who’s got so many selves to choose from.