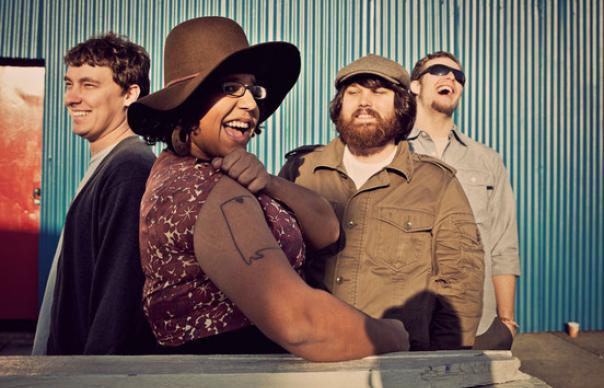 There is much to admire about Boys & Girls, the full-length debut by Alabama Shakes, not least its confidence. Just a few lines into the opening track, an anguished affirmation called “Hold On”, vocalist Brittany Howard tips a hat to “someone up above” who once helped her out of a jam with the admonishment “Come on, Brittany.” It takes some nerve to address oneself the third person 45 seconds into your first album: the chore of summoning it is probably made easier when you know you can sing like Brittany Howard can.

It could, indeed, be distractingly easy to spend the 36 minutes of Boys & Girls playing a who-is-she-doing-now parlour game with Howard’s incredible voice. Here she’s a Macy Gray-style throaty soul crooner (“Rise To The Sun”), there she’s a Patsy Cline-ish wounded balladeer (the title track), almost everywhere (especially on “Heartbreaker” and “Be Mine”) a Janis Joplin-esque belter wringing ecstasies out of her agonies. Howard’s singing is a glorious thing in and of itself, but it also reminds of something that has gotten lost: the properly big female voice, which has been so completely co-opted in recent years by indistinguishable talent show caterwaulers that it has come to subliminally signify insincerity and inanity. There is nothing of either defect about Howard, who sings everything here like she’s waited her whole life to do it, and is only going to be allowed to do it once.

Alabama Shakes hail from Athens, Alabama. It’s a small town in the north of the state, conveniently located for the obvious motherlode of Alabama Shakes’ principal influences ­ Muscle Shoals, the Alabama hamlet whose studios, during the 60s and 70s, oversaw the production of an astonishing and enduringly influential synthesis of soul and rock’n’roll. Otis Redding, Aretha Franklin, Etta James and Wilson Pickett recorded at FAME, The Rolling Stones, Bob Dylan and Lynyrd Skynyrd at Muscle Shoals Sound Studio. The four members of Alabama Shakes, you can well imagine, between them own large, well-thumbed and deeply-scratched collections of these records ­ and they’ve learnt well.

Alabama Shakes also understand, however, that the Muscle Shoals heritage has been genuflected to more than sufficiently, and could stand at least a little bit of slapping around: throughout Boys & Girls, Alabama Shakes rise commendably above any temptation to accompany Howard’s exclamations tastefully. There¹s something of The White Stripes’ somewhat cheeky brand of ancestor worship about them, which is to say that Alabama Shakes regard the rock¹n¹roll pantheon ­ correctly ­ much more as something to be looted than curated. So when they hit a chugging MGs groove on “Hang Loose”, they underpin its choruses with Heath Fogg’s snarling guitar and unhinged thrashes of Steve Johnson’s cymbals. When they start nodding north towards Motown on the verses of “I Found You”, they deny themselves the cute pop song they might have written ­ and which Zac Cockrell’s bass wilfully hints at, briefly threatening to turn it into “My Girl” ­ and instead summon an astonishing soul epic, Howard requiring the top reaches of her range to be heard over the colossal racket surging behind her. It is meant as nothing but a compliment to suggest that this song seems to go on much longer than the 2:59 it actually consumes.

It’s little surprise that Alabama Shakes have earned the approval and patronage of Drive-By Truckers, who’ve taken them on tour, and Booker T. Jones, who has recently been writing with them. It will be cause for some astonishment if the acclaim already visited upon this fine debut doesn¹t buoy them to still greater heights next time round. Alabama Shakes are scarcely the first ornery yet soulful rock sound to have emerged from northern Alabama, but they’re abundantly worthy bearers of the standard.
Andrew Mueller

Q&A
BRITTANY HOWARD
Whats Athens, Alabama, like? Is it true you used to deliver the post?
Quiet. Small. Peaceful. Lots of farms and fields. And yes. I only did it for about seven months, though. I got to quit in September.

Why choose a name that ties you so explicitly to your home state?
It¹s not a very deep answer. We were called The Shakes, but it turns out there’s a tonne of other bands called that. We thought of a few other things, but we liked how it sounded ­ like The Tennessee Two, or The Detroit Cobras.

Does it mean you get asked a lot about Alabama?
Yeah. Like we’re trying to be ambassadors, or something. But we could have been from anywhere and made this kind of music. We love Alabama and we’re proud of it, but we¹re not trying to push it.

A lot of Boys & Girls is very evocative of that Muscle Shoals soul sound, which was presumably hard to avoid when you were growing up…
Oh, yeah. We all grew up with that. I used to spend a lot of time with my grandmother, and all she listened to was a radio station called Solid Gold Oldies ­ all these great songs from the 50s and 60s. It’s the one thing we all understand.
INTERVIEW: ANDREW MUELLER