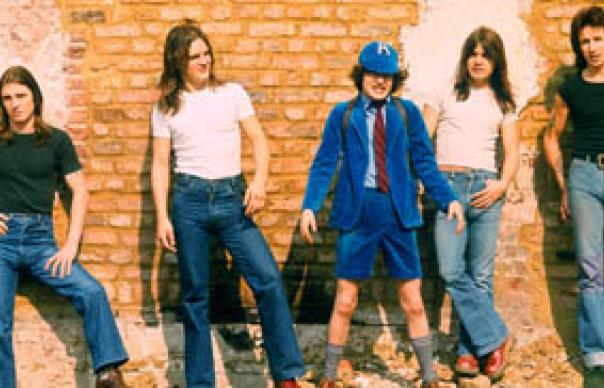 In December 1989, US forces attempting to smoke Panamanian dictator General Noriega out of hiding played AC/DC at ear-splitting volume until he finally surrendered. A note for Special Forces then: Plug Me In will do the trick in half the time.

A five hour riff-kreig of AC/DC in concert (or seven, if you bag the Collectors edition) Plug Me In is not for the uninitiated. There are points – particularly in the latter stages of DVD 2, where the band are captured gurning through “The Jack” live in 2001 – that even the most fanatical fan will acknowledge that their salty, Chuck Berry meets Benny Hill boogie loses some of it’s magic in the journey from enormodome to living room.
Yet as footage of the Bon Scott years, the righteous mayhem of Back In Black and even the gonzoid stadium smut of “Stiff Upper Lip” show, Plug Me In offers a route into a riotously un-PC world of sweat, jugs and rock’n’roll where Hell is fun, hookers have a heart of gold and sexual diseases are something to brag about.

We begin, then, with a TV performance of “High Voltage” from 1975. With the band dressed up in garish Carnaby Street threads and Bon Scott terrorising the front row in a lace up catsuit, they could almost be an Antipodean answer to The Sweet, if Angus wasn’t jitter-like bugging across stage like a crazed Jeanette Kranky.

Following some grainy footage taken at their first ever gig in Sydney, we’re soon witnessing AC/DC in their pumped-up pomp. You can almost smell the liquor ‘n’ sawdust during cranked up renditions of “Dog Eat Dog” and “Let There Be Rock” filmed at a raucous Glasgow Apollo in 1978. But it’s a clip of “Highway To Hell” from Dutch TV in 1979 which marks their transition from feisty outsiders to genuine cock-rock contenders. Stripped to the waist and with the band superglue tight behind him, Scott is Rod, Ozzy and Alex Harvey rolled into one – a bar-room screamer who”ll steal your girl, start a fight and drink you under the table and still give you the best night of your life.

It’s only when they enter the real world for a plain awful version of “Rock Me Baby” with The Rolling Stones in 2003, where the Young brothers, for once, look lost, that the spell gets broken.
“How many dirty deeds have you done in the last year?” an interviewer asks Angus during a promo flick for Dirty Deeds Done Dirt Cheap.
A filthy grin, a quick touch of the grubby school cap.
“Err, about four hundred and fifty…”
Let there be rock.