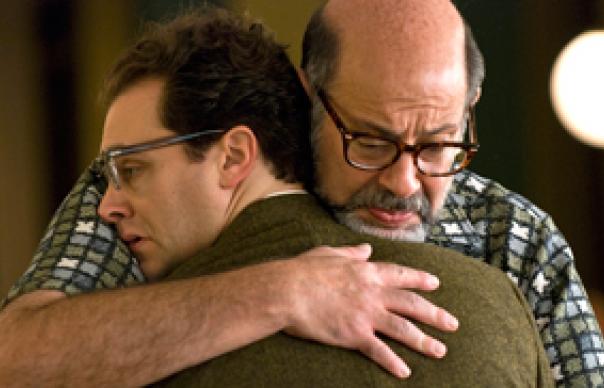 1967, Minnesota. Larry Gopkin, a university physics lecturer, is not a happy man. His dysfunctional family are causing him problems, and he’s equally beset by troubles at work. Yet Larry is a man of faith – the only question is whether his faith can help him through a divorce, his son’s bar mitzvah, his hapless brother’s extended stay on the couch, and his comely neighbour, who has a habit of sunbathing naked in the next door garden…

A Serious Man arrives at a time when the Coens stock as filmmakers arguably couldn’t be any higher. They picked up four Oscars for No Country For Old Men in 2007, and followed it last year up with the comedy Burn After Reading, toplined by their most multiplex friendly cast to date, including George Clooney and Brad Pitt. At this point, you think the Coens could make any kind of film they wanted, with an unlimited budget and the juicy pick of Hollywood’s A list theirs for the taking. So what do they do? They make an odd, inscrutable little film without any stars, set in the late 60s, and they pack it full of references to Jewish religious traditions and culture. And the first 15 minutes is a Yiddish-language prologue. Set in the 1900s. In Poland.

A Serious Man feels – initially, at least – like a return to an earlier kind of filmmaking for the Coens. There’s something about the film’s setting, a quiet Jewish enclave in suburban Minnesota, that reminds me of the loopy world of Fargo’s Brainerd, with its own set of habits and customs and unmanageable surnames. This Minnesota is a flat, nondescript place, full of identical sun-bleached houses with little square patches of lawn – the kind of suburban nightmare that filmmakers from David Lynch on have described as the epitome of evil itself.

1967, a year of considerable cultural upheaval, is rarely a concern for most people here. But that’s not to say that this is always going to be the case; there are signs that the world at large is beginning to creep in. And in many ways, A Serious Man is a jeremiad, concerned with the attempts of hapless university physics professor Larry Gopkin (Michael Stuhlbarg) to hold onto his faith as the wider, secular world intrudes. Stuhlbarg, an American stage actor with only a few films on his CV, is brilliant as the anxious, bespectacled Larry, pursing his lips and pulling his shoulders tighter into his body as the next humiliation hoves into view.

A Serious Man is structured, like a farce, as a series of incidents designed to push Larry’s beliefs to its limits. His young son, Danny, with his bar mitzvah looming, spends all his time listening to Jefferson Airplane on his headphones in school or smoking pot. His daughter, Sarah, is obsessed with getting a nose job. Larry’s brother, Arthur, is living on the sofa, filling a notebook with a genius/bonkers physics manifesto or locking himself in the toilet to drain a troublesome sebaceous cyst. At college, one of his students attempts to bribe him after failing his grades, then threatens to sue for defamation. The Columbia Records Club deluge him with phone calls about an account of which he has no knowledge. His neighbour’s wife, who sunbathes naked in full view of Larry, tempts him. And, worst of all, his own wife, Judith (Sari Lennick), is leaving him for a sanctimonious widower called Sy Abelman (Fred Melamed). But Larry, a good guy and a serious man – morally upstanding, a teacher, father – won’t retaliate.

Seeking guidance from a trio of Rabbis, Larry tries to find meaning in his misfortunes. Of course, the irony is clear enough that as a physics professor, Larry is used to dealing in scientific uncertainties – Schrödinger’s Cat and the Heisenberg Principle all get a look in – yet his faith is a matter of cast-iron fact. When he begins to question that, he encounters silence – or, at best, a fantastic joke involving the members of Jefferson Airplane. “It’s not always easy, deciphering what God is trying to tell you,” one character advises.

As ever with the Coens, you might wonder how much of all this is just a shaggy dog story. The prologue – an ersatz folk story, in which a couple are cursed by a man who may or may not be a ghost – and an lengthy anecdote about a Jewish dentist who finds Hebrew letters spelling the words “Help Me” on the backside of a goy’s teeth, might be relevant to the plot. Then again, it’s equally likely that they are not. It might be that A Serious Man is about how Shit Happens, and that, as Larry learns, trying to explain the random, capricious cruelty of the universe doesn’t ever yield anything. As the credits close, the words “No Jews were harmed in the making of this motion picture” appear on screen. It’s a great punchline. But in many ways, it’s also a fat lie: if anything, the Coens are playing God here, unleashing arbitrary and vindictive torments on Larry.

By the end, Larry is left asking exasperatedly for the umpteenth time: “Why me?” Only Grace Slick seems to get the point of this unusually cruel comedy: “When the truth is found to be lies/And all the joy within you dies/Don’t you want somebody to love.”