In the pre-Civil War United States, Solomon Northup, a free black man from upstate New York, is abducted and sold into slavery... 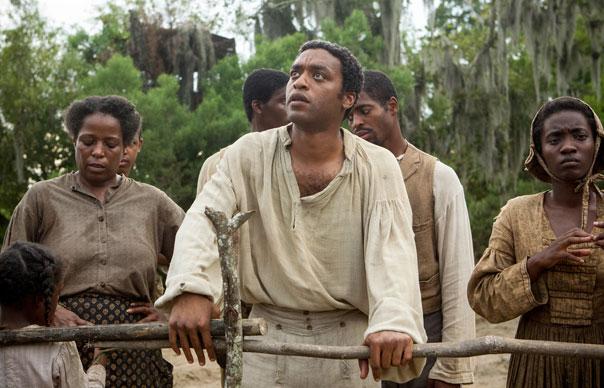 In the pre-Civil War United States, Solomon Northup, a free black man from upstate New York, is abducted and sold into slavery…

12 Years A Slave marks the big step-up for film director Steve McQueen, as he leaves behind hunger strikes and sex addicts for a larger project about another difficult yet hefty subject: slavery. Significant awards talk is in the air. McQueen is keen to make his mark on this material – but nevertheless is sensitive to the demands of the marketplace in which his film will be shown. On one hand, there is a silent tableau of slaves filmed standing by the side of a plantation, rich with the kind of experimental vibes you’d expect from a former Turner Prize winner. On the other, to acknowledge the milieu in which McQueen now moves, there is the score – a violin theme that, you suspect, in the hands of, say, Hans Zimmer, would have been delivered by a massed orchestra with added choirs.

12 Years A Slave is based on a memoir by Solomon Northup (Chiwetel Ejiofor), a free-born African American who was kidnapped in 1841 and sold into slavery. McQueen’s film follows his passage through a succession of owners – Paul Giamatti, Benedict Cumberbatch, Michael Fassbender.

The worst of the lot is Fassbender – enjoying his Amon Goeth moment as cotton planter Master Epps, a man for whom money, power, lust and whiskey have stripped all morality. If he is to survive, Northup – an intelligent, educated man – must keep the truth about his abilities from his masters.

As a corrective to Tarantino’s cartoon Django Unchained, 12 Years A Slave is entirely successful – it is a sober, non-judgmental study that does not preach to audiences. In contains many powerful and lasting images, not least a prolonged shot of Northup, strung up from a tree as punishment, his feet barely reaching the ground, while plantation life continues around him. But for all its commendable points, as a film it never quite hangs together cohesively. Its at least 20 minutes too long, while the episodic structure – as Northup passes from owner to owner – breaks the film’s pacing. A late cameo from Brad Pitt (incredibly, given star billing on an early version of the Italian film poster) jolts you out of the movie entirely.

It’s unflinching in its portrayal of the privations suffered during slavery, but some voices worry it’s too unsparing for American audiences. It’s certainly not as worthy as Spielberg’s Amistad – or as syrupy as The Butler, which tells the history of the civil rights movement as witnessed by a black butler who served through eight White House administrations. In essence, this is a terrifically well-intended and necessarily difficult movie to watch: but I’m not entirely convinced McQueen has delivered quite the masterpiece some would suggest it is.
Michael Bonner