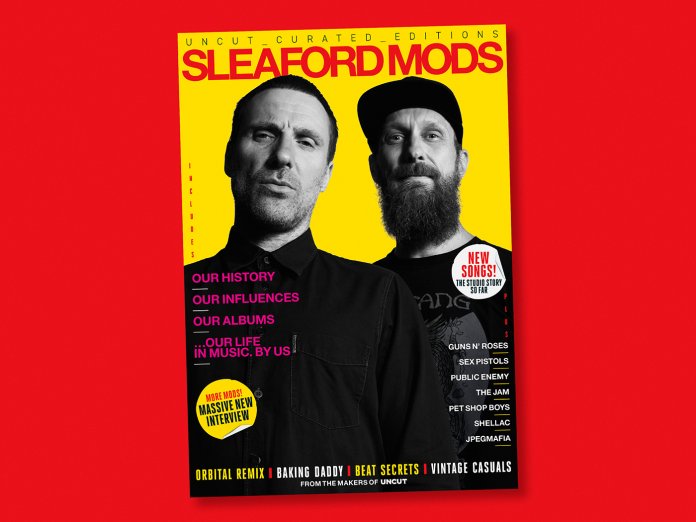 There were a couple of moments during one of my interviews with Jason Williamson from Sleaford Mods where the difference between his past life and his present came sharply into focus.

We were talking, at one point, about a time some years ago when things were not going well with his music career, when his residential situation was unstable and a promising development seemed to be a couple of under-populated gigs in London – only for his flow to be interrupted by a smiling figure at the end of the table.

“Recognised you from over there – can I have a selfie?”

It’s taken about 15 years for Sleaford Mods to develop from sofa-surfing solo project founded on uncleared samples and limited-run CDRs, to being a principled duo on the point of launching an arena tour, and a happy candidate for town centre selfies. And it’s fair to say, Jason seems to be loving it. As he describes it, he had a eureka moment when “the formula” for Sleaford Mods – looping a piece of music and then shouting over it – came to him, and since then he’s been driven by a conviction to make it work.

It’s an inspiring story you can read in full in this new “Curated By…” Special Edition, in which we dive deep, with the band’s help, into the world of Sleaford Mods. As they do to their band, Jason and Andrew Fearn have fully-immersed themselves in this project, too: they’ve been interviewed on every aspect of their career, to build the fullest possible picture of their life in music. We’ve asked them about the formula, of course. And also their influences. Their beats. Their relationship. The pivotal events. All those CDRs. The key places. Even their clothes.

It’s all here. We’ve spoken to collaborators and former associates, hearing about formative experiences, key moments and enduring inspirations. We’ve jumped on a Zoom call with movie directors and tracked down local DJs. Gone with them to the venue where they met. We’ve even joined Sleaford Mods in the studio as work on new songs begins.

At this stage, one called “Pit To Pit”, conflating world vibrations during lockdown with Jason’s experiences in the vintage terracewear underworld, sounds especially promising. With that in mind, we spent some illuminating time talking to Jason about his favourite clothing. His attitude to his look seemed to mirror that he has to his band.

“Hardwearing,” he says of one piece. “Absolutely not concerned what you think about it.”