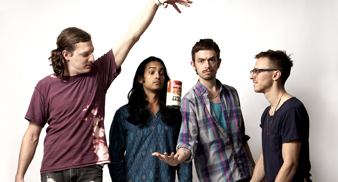 Yeasayer are among the first bands booked to play the Uncut stage at this year’s Great Escape Festival.

Yeasayer [pictured above], the most expansive, eclectic band on the new Brooklyn scene will be joined by Wild Beasts, a compelling mix of Orange Juice jangle and Billy Mackenzie operatics; and No Age, a thrilling punk update of My Bloody Valentine, who are revolutionising the LA music scene on the Uncut-sponsored stage.

The Great Escape is an annual three-day festival of the best new music in the world, and this year takes place at venues around Brighton between May 15 and 17.

We’ll be confirming many more bands for our bill over the next few weeks; keep an eye on uncut.co.uk.

In the meantime, Early Bird Festival tickets are available for £35, allowing you access to all Great Escape gigs over the festival’s three days (so long as there’s room in each venue when you get there, of course).

Meanwhile, Yeasayer are also about to head out on a UK tour, the dates are: