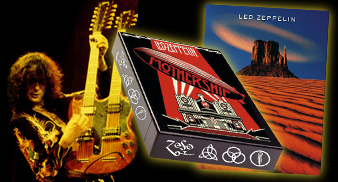 Uncut.co.uk has an amazing limited edition ‘Mothership’ hard drive pre-loaded with Led Zeppelin‘s entire back catalogue to giveaway to one lucky reader!

The 120GB LaCie USB hard drive is one of only 100 to be made worldwide, coinciding with the release of a brand new Led Zeppelin live two-disc DVD.

The DVD includes restored footage of Led Zep’s performances from London’s Royal Albert Hall in 1970, Madison Square Garden in 1973, Earl’s Court in 1975 and Knebworth Festival in 1979.

The films have been cleaned up and remastered under the personal supervision of Zep guitarist Jimmy Page and director Dick Carruthers.

To win this superb prize, all you have to do is click here and answer a simple question.

The full DVD tracklisting is as follows:

Disc 1: The Royal Albert Hall, 1970:
We’re Gonna Groove
I Can’t Quit You Baby
Dazed and Confused
White Summer
What Is and What Should Never Be
How Many More Times
Moby Dick
Whole Lotta Love
Communication Breakdown
C’Mon Everybody
Something Else
Bring it on HomeDisc 2:Immigrant Song (1972)
Madison Square Garden, 1973:
Black Dog
Misty Mountain Hop
Since I’ve Been Loving You
The Ocean
Earls Court, 1975:
Going to California
That’s the Way
Bron Y Aur Stomp
In My Time of Dying
Trampled Underfoot
Stairway to Heaven
Knebworth, 1979:
Rock ‘n’ Roll
Nobody’s Fault But Mine
Sick Again
Achilles Last Stand
In the Evening
Kashmir
Whole Lotta Love

More details about the Led Zeppelin DVD are available by clicking here.

See the February issue of Uncut, in stores now, for our definitive review of Led Zeppelin’s one-off show, in tribute to Ahmet Ertegun, which took place at London’s O2 Arena last month.