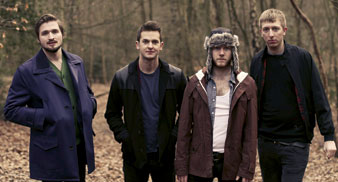 Wild Beasts have announced plans for a handful of UK tour dates for next year.

The band, who are set to play at London‘s 02 Shepherds Bush Empire tonight (November 23) as part of their current UK tour, have confirmed a run of another seven shows to take place in March 2012.

The tour will kick off on March 11 at Coventry Warwick University and come to an end on March 17, when they play at Liverpool Masque Theatre.

Wild Beasts released their third studio LP, ‘Smother’, earlier this year. Earlier this month, the band’s frontman Hayden Thorpe told NME that they were planning on taking a long break next year, and warned fans not to expect a new album before mid-2013.

Thorpe also recently compared his vocals to Marmite and revealed he wasn’t aware how divisive fans would find his distinctive countertenor style until the Cumbrian troupe released their first record.